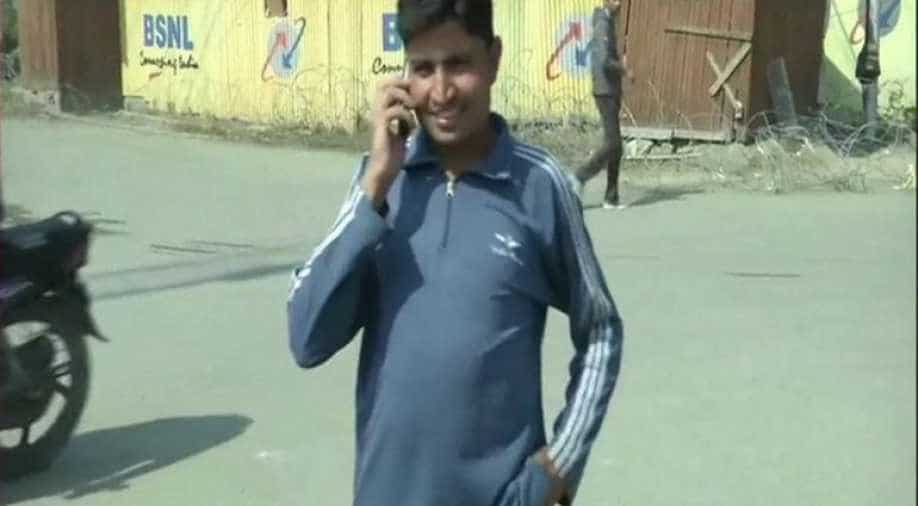 A local in Srinagar talking on phone Photograph:( ANI )

People across Jammu and Kashmir heaved a deep sigh of relief after postpaid mobile services were fully restored in the region.

People across Jammu and Kashmir heaved a deep sigh of relief after postpaid mobile services were fully restored in the region on Monday.

As Jammu and Kashmir is limping back to normalcy, mobile services were restored at 12 noon today after a span of over two months since the central government's move to abrogate Article 370 that granted special powers to the region.

Locals said they were not able to contact their near and dear ones and had felt a sense of loneliness without mobile phones.

"I am happy that phone services are operational. Now, I can talk to my family members. There was a lot of problems for us in the last 70 days. My brothers were outside Kashmir and we were not able to maintain contact with them. Without mobile phones, our lives came to a standstill," a local, Farooq Ahmed, told ANI.

Echoing similar sentiments, another resident hoped that postpaid mobile services would continue to be operational in the region.

"I am very happy that mobile connectivity has been restored fully. Earlier, we were facing the inconvenience of talking to people. When the network was down, we were feeling a sense of loneliness. But, now we can talk to our near and dear ones. I hope that the services continue to be operational," another local named Gopal said.

All network and landline connections were suspended across Jammu and Kashmir on August 5, in view of security concerns in the region post-abrogation of Article 370.

Last week, Jammu and Kashmir Principal Secretary Rohit Kansal had said that the postpaid mobile services would be restored after reviewing the security situation in the region.

"Having reviewed the situation, a decision has now been taken to restore mobile phone services in the remaining areas of Jammu and Kashmir. All postpaid mobile services, irrespective of the telecom operator will stand restored and be functional from 12 noon on Monday, October 14. This will cover all 10 districts of Kashmir province," Kansal had said on October 12.

Although the landline network was restored in phases, restrictions remained on the usage of mobile devices in various parts of the Valley. Apart from restoring telecommunication services, restrictions on movement have been removed in 99 per cent of the areas in Jammu and Kashmir.

The administration had also said that tourists desirous of visiting the region will be provided with the necessary assistance and logistic support.

The central government had abrogated Article 370 and also bifurcated the former state into Union Territories (UTs) of Jammu and Kashmir and Ladakh. The new UTs will come into being on October 31.