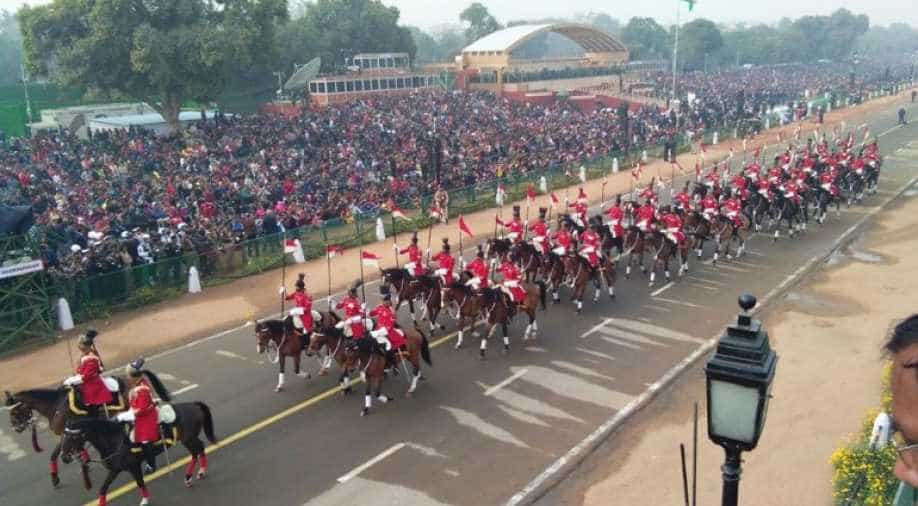 Full dress rehearsal of the Republic Day Parade was held at Rajpath in the Delhi on Tuesday morning. Photograph:( ANI )

For this reason, the government is encouraging people to use hybrid mode to watch live Republic Day celebrations. This year, the Republic Day parade will begin at 10:30 am instead of 10:00 am to allow for better visibility by the time of the flypast.

One of the most notable activities on January 26 is the Republic Day Parade.

The main procession takes place on Rajpath in New Delhi.

People from all over the country buy tickets ahead of time to guarantee that they have the best seats in the house for the event.

Where can you watch Parade online?

To host the events digitally, the Ministry of Defence has created a website, www.indianrdc.mod.gov.in, as well as a YouTube channel, 'Indian RDC.'

The march will be livestreamed on Doordarshan's YouTube page from the moment Prime Minister Narendra Modi visits the National War Memorial at India Gate to its very conclusion.

The DD National and DD News YouTube channels, as well as the NewsOnAir app and website, will have live coverage.

On the Press Information Bureau's YouTube site, a live feed of the Republic Day parade will be available.

By signing in to https://www.mygov.in/rd2022, you can register for the event online at MyGovIndia's official website.

If you're going to see the parade this year, here's how to make the most of it.

Beginning January 20, 2022, tickets for the R-Day Parade and Beating Retreat Ceremony will be available at the following counters:

The Beating Retreat Rehearsal will take place on January 28, 2022.

Tickets for the Beating Retreat Ceremony will be available from January 20 to January 28.

On January 26, all ticket counters may be closed in honour of Republic Day.