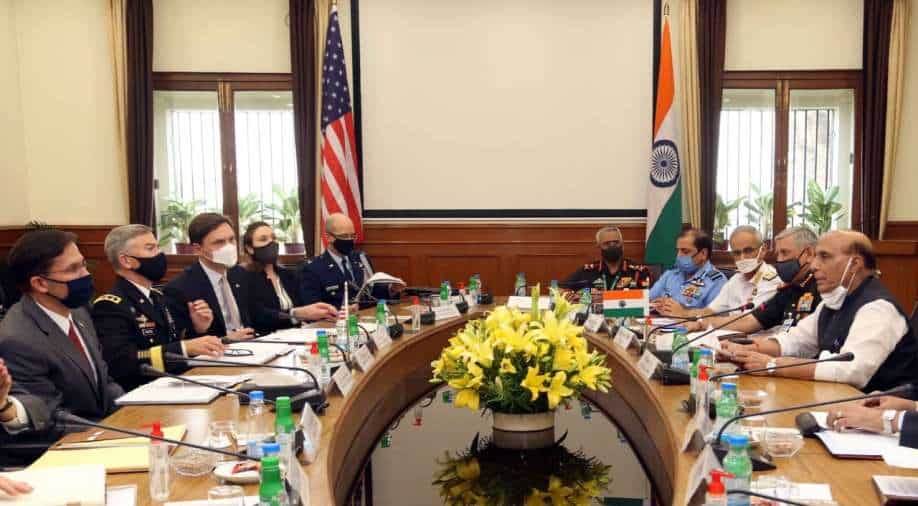 Rajnath Singh and Mark Esper at the meeting Photograph:( WION )

Special focus was laid on logistical support and maritime cooperation, which includes majorly naval cooperation between the two countries.

Indian Defence Minister Rajnath Singh and US Defence Secretary Mark Esper on Monday held a one-hour long bilateral meeting in New Delhi -- during which they discussed a number of issues, including expanding joint service cooperation.

Special focus was laid on logistical support and maritime cooperation, which includes majorly naval cooperation between the two countries.

Indian Navy and US Navy's Nimitiz supercarrier, earlier this year, undertook passing exercises in the Indian Ocean. Also in 2019, US and India held their first-ever tri-service exercise, Tiger Triumph, in which the US Navy and Marines, Air Force, and Army participated.

The Indo Pacific concept, which is backed by both US and India, was also discussed.

The United States welcomed Australia's inclusion in the Malabar naval exercise alongside India and Japan -- that will take place in November.

Also, India invited US companies for Make in India defence programme. Through the US - India Defence Technology and Trade Initiative, the United States and India are working together on co-production and co-development of defense equipment.

Esper and US Secretary of State Mike Pompeo are in New Delhi for the India-US 2+2 meet that will happen on Tuesday. The meeting will begin at 10 am and will be followed by a joint call by Indian and American foreign and defence with the Indian Prime Minister Narendra Modi.