Rafale deal: We chose Ambani ourselves, not putting the money in Reliance, says Dassault CEO Trappier 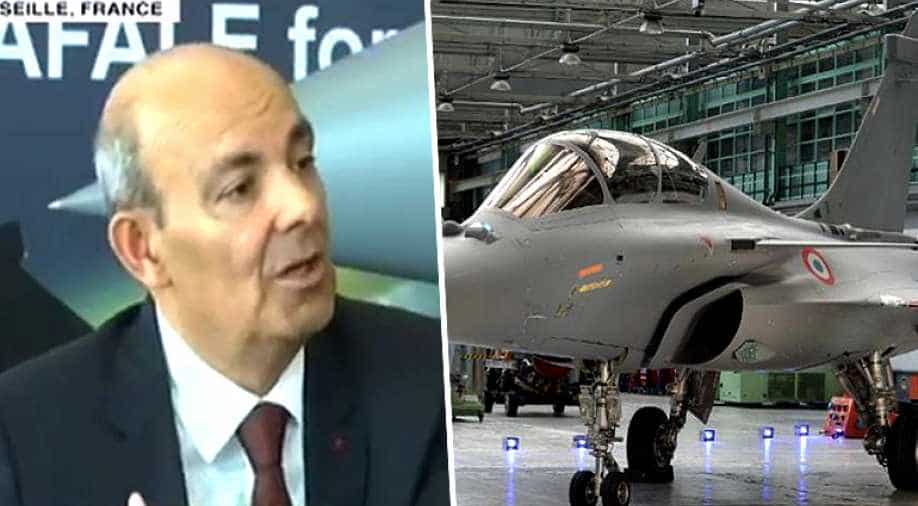 The government informed the court that it followed the process laid down by the previous UPA government in 2013.

Dassault CEO Eric Trappier has rubbished allegations made by Congress president Rahul Gandhi that the former lied about the details of the Dassault-Reliance Joint Venture (JV) for offset contracts in the Rafale Jet deal. Tappier said that the company chose Ambani and it has 30 partners other than Reliance.

"I don't lie. The truth I declared before and the statements I made are true. I don't have a reputation of lying," Trappier said during an interview with newswire ANI when asked to respond to Rahul Gandhi's charge that Dassault was covering up for possible cronyism in awarding the offset deal to Anil Ambani-led Reliance Group.

"In my position as CEO, you don't lie," the Dassault CEO added.

The government on Monday had submitted documents related to the procurement of 36 Rafale fighter jets from France’s Dassault while emphasising that it had followed the "due process".

The pricing documents were submitted in a sealed cover. The government informed the court that it followed the process as laid down by the previous UPA government in 2013.

"We have long experience with Congress," he said, adding, "our first deal was with India in 1953 was during Nehru, later other PMs. We are not working for any party, we are supplying strategic products to the Indian Air Force and the Indian government."

"The first delivery of Rafale to the IAF is going to take place next year in September as per the contract. It is totally in time, Trappier said.

"We have seven years to perform our offset. During the first three years, we are not obliged to say with who we are working. Already settled agreement with 30 companies which represents 40% of total offset obligation as per contract. Reliance is 10% out of the 40," he informed.

The document submitted in court by the government addressed allegations made by Congress president Rahul Gandhi that PM Modi forced the French company Dassault Aviation to select a Reliance group firm of Anil Ambani as an offset partner to help it "pocket" Rs 30,000 crore.

"As per available information, our adversaries inducted more than 400 fighters (equivalent to more than 20 Squadrons) during the period from 2010 to 2015. They not only inducted 4th Generation Aircraft but also inducted 5th Generation Stealth Fighter Aircraft," the government told the top court.

It stated that as per the Defence Offset Guidelines, the vendor is "free to select its Indian Offset Partners (IOPs) for implementing offset obligation".

"We chose Ambani by ourselves. We already have 30 partners other than Reliance. The IAF is supporting the deal because they need the fighter jets for their own defence to be at the top," Dassault CEO Trappier said.

"We are not putting the money in Reliance. The money is going into the JV (Dassault-Reliance). Engineers and workers from Dassault are taking the lead as far as the industrial part of the deal is concerned," Trappier added.

The Centre told the Supreme Court that 74 meetings of the Indian Negotiating Team (INT) took place, including 26 with the French side, from May 2015 to April 2016 on the Rafale deal.

INT was constituted to negotiate the terms and conditions of the procurement of 36 Rafale aircraft.

The French side was headed by the Director General of Armament (DGA), Ministry of Defense, Government of France, it said.