Protests over Rafale, Cauvery; both Houses adjourned for the day 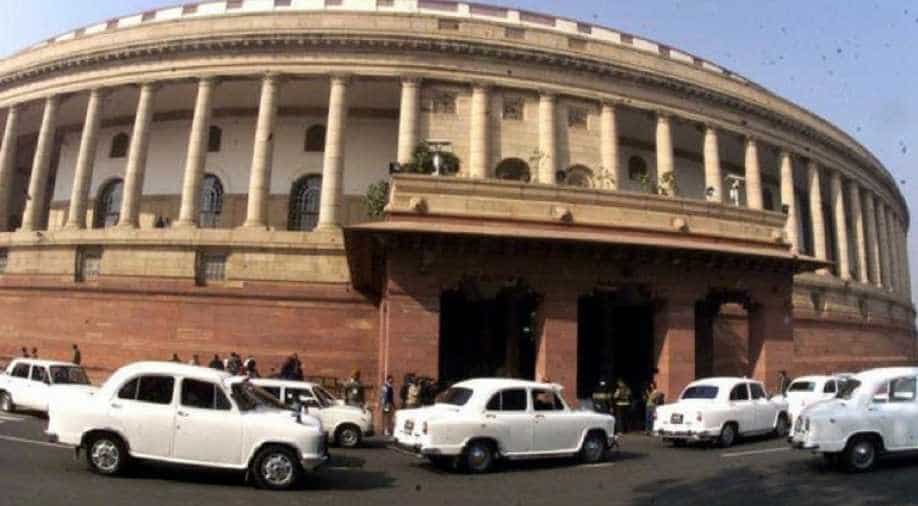 Wednesday was the second day of the Winter session

The two Houses of Parliament were Wednesday adjourned without transacting much business as the opposition staged protest on a variety of issues, including Rafale jet deal, Ram temple and Cauvery river water.

Wednesday was the second day of the Winter session. On the first day on Tuesday, both Houses were adjourned after paying obituary to former prime minister Atal Bihari Vajpayee and union minister Ananth Kumar.

In the Rajya Sabha, the National Trust for the Welfare of Persons with Autism, Cerebral Palsy, Mental Retardation and Multiple Disabilities (Amendment) Bill was passed amid slogan shouting by opposition members.

The Lok Sabha was adjourned for the day just after noon following protests by opposition members on various issues including the Rafale deal, construction of Ram Temple and Cauvery river water.

Immediately after the House reconvened at noon, Congress, Shiv Sena, TDP and AIADMK members trooped into the well with placards and started shouting slogans in support of their demands.

Congress members were demanding a probe by a Joint Parliamentary Committee into the alleged corruption in the Rafale aircraft deal while Shiv Sena MPs staged protests demanding immediate construction of the Ram temple in Ayodhya.

Speaker Sumitra Mahajan tried to pacify members but in vain.

As the ruckus continued, the Speaker adjourned the House for the day.

The Rajya Sabha was adjourned twice in the pre-lunch period and for the day around 2.15 pm as the two main political parties of Tamil Nadu -- the AIADMK and DMK -- staged protests on the Cauvery river issue.

The Upper House was first adjourned till noon soon after laying of papers and then again till 2 PM soon after the Question Hour started at 12 pm.

Soon after ministers laid listed papers on the table of the House, AIADMK members trooped into the Well carrying a banner that read 'protect the lives of Cauvery delta farmers'.

DMK members too entered the Well raising issues related to the Cauvery river.

Chairman Venkaiah Naidu urged them to return to their seats. He said notices have been received from several parties for discussion on issues of urgent importance.

The Chairman said though he has not allowed the issues to be raised under Rule 267 (suspension of business to take up a matter), all issues would be taken up for discussion.

As the two parties continued to protest, Naidu said only on Tuesday people in some states have shown their "confidence in democracy" and asked members to respect sentiments of the people.

"I am not going to be dictated in this way (protest)," Naidu said.

With protesting members not relenting, Naidu adjourned the House till noon.

When the House met at 12, AIADMK members trooped into the well and raised protests carrying placards.

"If the House wants to function and discuss issues of public interest, we will do it. If you don't want, why waste time of people....So many issues are there," Naidu told the House.

The protests continued when the House met again at 2.00 PM.

Amid noisy scenes, The National Trust for Welfare of Persons with Autism, Cerebral Palsy, Mental Retardation and Multiple Disabilities (Amendment) Bill, 2018 was passed.

The proposed amendments entail fixing the term of the Chairperson of the National Trust for Welfare of Persons with Autism and other Disabilities.

Moving the bill for consideration and passage, Social Justice and Empowerment Minister Thaawarchand Gehlot said a Chairperson could not be appointed even after several attempts since 2012 as a suitable candidate meeting the stringent selection criteria could not be found.

Gehlot said the amendments will ease the procedure related to the appointment of a Chairperson.

"The Chairperson will have a three-year term now and the selection process for his successor will be initiated six months before his tenure ends and completed before he retires," said the minister.

As the protests continued, Parliamentary Affairs Minister Vijay Goel said: "This Bill is for the disabled and there is a consensus among all parties. I am requesting all parties to pass it".

The Bill was passed in the Upper House shortly before the House adjourned for the day.