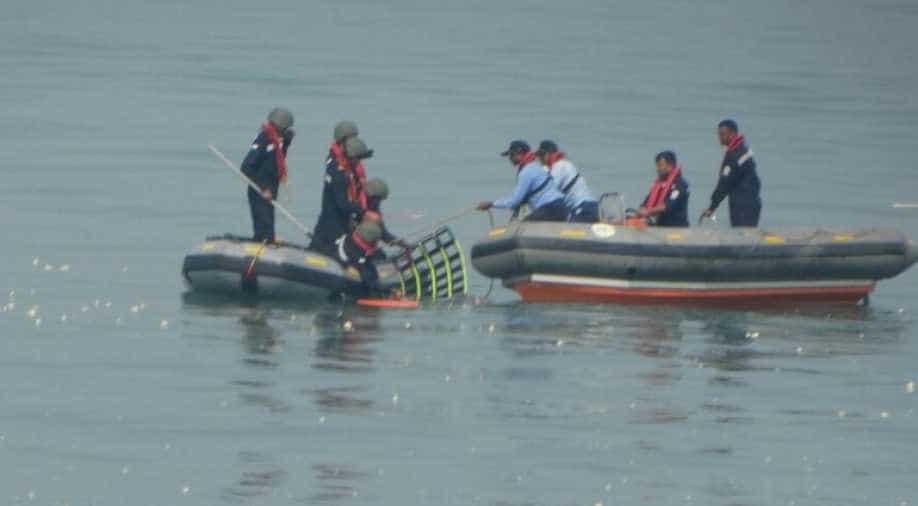 "ONGC vessels and choppers along with the Coast Guard and Indian navy are combing the areas where the chopper has apparently crashed," the ONGC statement said. Photograph:( ANI )

A Pawan Hans helicopter with seven persons on-board, including five ONGC officers and two pilots, crashed off the Mumbai coast minutes after it took off for the state-owned company's oil installation in the Arabian sea.

So far, four bodies have been recovered, Oil and Natural Gas Corporation said in a statement.

The search operation is on for other missing persons.

The Pawan Hans helicopter with five ONGC officers, including three of the level of Deputy General Managers, went missing around 10.40 hours today.

ONGC, Coast Guard and Navy pressed helicopters and speed boats as soon as the information of the chopper going missing was received at the Juhu helibase.

ONGC has key oil and gas fields off the Mumbai coast and Pawan Hans helicopters routinely ferry company employees and officers to the oil installations that are situated as far as 160 kilometres from the coastline.

The field in the offshore include Mumbai High, the nation's largest oil field and Bassein fields, the largest gas field.

The helicopter crash is not the first accident in ONGC's history. In August 2003, Mi-172 helicopter crashed off Mumbai coast killing 27 company persons and pilot on-board.

"ONGC vessels and choppers along with the Coast Guard and Indian navy are combing the areas where the chopper has apparently crashed," the ONGC statement said.

"Identification of the bodies is in progress".

The chopper Dauphin N3 had gone missing after taking off from Juhu aerodrome at 10.30 AM.

The chopper, bearing registration number VT-PWA, was scheduled to land at the designated oil rig at Mumbai High at 11 am. Five employees of state-owned Oil and Natural Gas Corporation (ONGC) and two pilots were on-board the chopper.

The Navy said it had deployed its stealth frigate INS Teg for the search operation, while surveillance aircraft P8i was also pressed into service.

The Coast Guard had also diverted its ships to search the missing chopper.

"Since it is a clear accident, this chopper crash will be probed by the Aircraft Accident Investigation Bureau (AAIB)," the official said.

He said the DGCA will extend all necessary help to the AAIB in conducting the probe.

AAIB is the apex body which probes serious incidents and accidents, involving aircraft registered in India and comes under the civil aviation ministry.

Minister of State for Civil Aviation Jayant Sinha expressed deep anguish over the loss of lives.

"IndiaCoastGuard Ship on receipt of information reached area, located the debris, picked up a body at 1230 hrs," he said on twitter.