NPP set to form non-Congress govt in Meghalaya with BJP, Conrad Sangma to be next CM 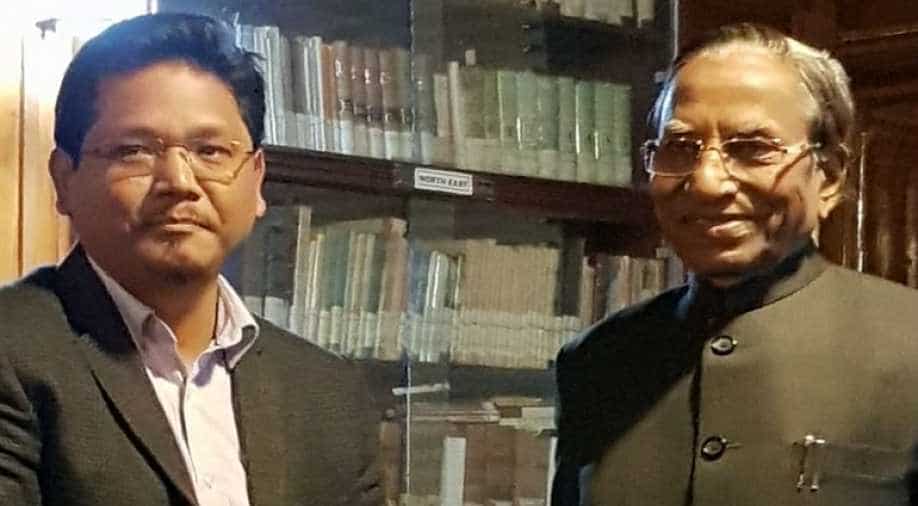 The NPP is all set to form a non-Congress government in Meghalaya with the support of three regional parties, the BJP and one Independent MLA.

Conrad Sangma, the lone NPP Lok Sabha member from Tura constituency, will be sworn in as the Chief Minister on March 6.

Sangma on Sunday met Meghalaya Governor to stake claim to form the next government in the Northeast state.

NPP came out as the second largest party with 19 seats in the recently held elections which threw a hung verdict.

Meanwhile, Bharatiya Janata Party (BJP) leader Himanta Biswa Sarma, who earlier in the day extended support to NPP, informed that Conrad Sangma will be the next chief minister of the state.

Conrad Sangma will be the next chief minister of #Meghalaya: Himanta Biswa Sarma, BJP pic.twitter.com/Ou22DLZ8fh

Sarma also informed that there will be no deputy CM in the new government.

1 MLA out of every 2 MLAs of all the parties will form part of the govt. So 1 MLA, out of the 2, of BJP will be a part of it too: Himanta Biswa Sarma, BJP #Meghalaya pic.twitter.com/moPYMOYE33

Addressing media after his meeting with the governor, Sangma said the next two-three days are very crucial and promised that everything will be clear by tomorrow.

"Next 2-3 days are very crucial because Assembly term gets over. The House expires on 7th before that everything has to take place and by tomorrow everything will be clear," he said

"We have submitted a letter of support of 34 legislators to Governor Ganga Prasad and staked claimed to form the new government," Conrad Sangma told media as he emerged from Raj Bhavan.

As per media reports, the oath-taking ceremony is likely to take place on 6th March at 10.30 am.

Earlier, Congress also staked its claim to form the next government in Meghalaya after senior party leaders met the Meghalaya Governor last night.

Congress emerged as the single largest party with 21 seats in the 60-member assembly.