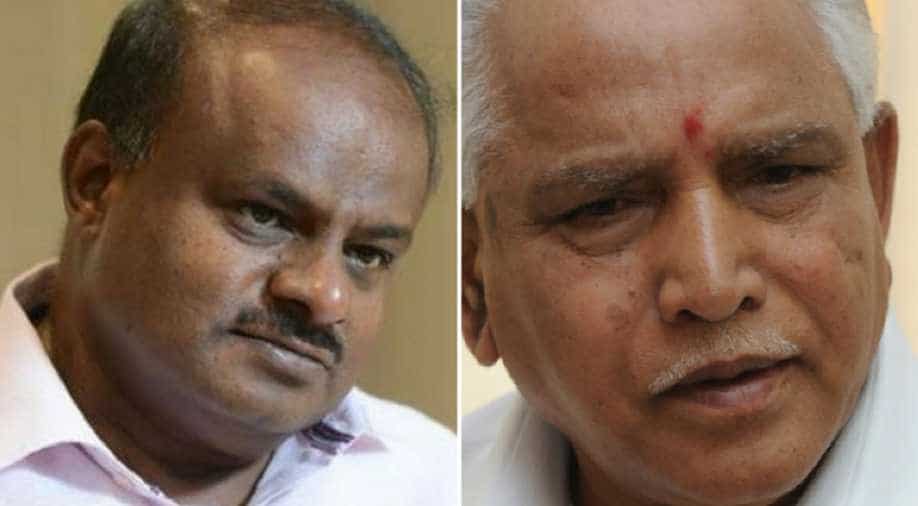 The drama in Karnataka will continue on Wednesday with both the JD(S)-Congress combine and the BJP meeting Governor Vajubhai Vala today to stake their claims to forming a government.

The JD(S)'s HD Kumaraswamy had met Governor Vala Tuesday evening, and staked his claim to forming a government in the state.

The Congress told Vala that it was giving the JD(S) its "unconditional support".

But the BJP's chief ministerial candidate got to Vala before Kumaraswamy, and he too staked his claim to forming the government.

Also read: Congress does to BJP in Karnataka what latter did to it in Goa

The Karnataka vote, which was counted yesterday, ended with the BJP emerging as the single largest party.

Karnataka has 224 assembly seats but voting was held for 222. The halfway mark then is 111, with a party needing 112 seats for a simple majority.

The BJP is short by 8 seats, while the JD(S)-Congress combine (including the BSP) has 116 seats.

But Yeddyurappa told Governor Vala yesterday that he should be the one invited to try and form a government since the BJP has emerged as the single-largest party in Karnataka.

Former Karnataka chief minister Siddaramaiah meanwhile quoted the Supreme Court as saying after the Goa election that "group having more seats than required are invited".

Have called for a meeting tomorrow. Newly elected Congress & JD(S) MLAs will be there. We are supporting JD(S) to form govt & have sent this resolution to the Governor. SC said after Goa election that group having more seats than reqd. are invited, we have 117 seats: Siddarmaiah pic.twitter.com/YT5IEaHO9H

Remember, in Goa and Manipur, which went to the polls last year, the Congress had emerged as the single-largest party. But the BJP ended up forming coalition governments in both states because the Congress was not able to muster up the needed numbers.

All eyes, in Karnataka and the country, then are on Governor Vala and what he does next.

Constitutional experts have said the decision is his but that he will have to be guided by the principle of inviting the combine/ party that he thinks will provide the state with a stable government.

Tomorrow at 10:30 am in BJP legislative party meeting, I am going to be elected as party leader. After that all MLAs are going to meet the Governor to request him to allow BJP to form govt. Now the ball is in the court of the Governor. We will do as he decides: BS Yeddyurappa pic.twitter.com/6QbhizTr6z

The JD(S) meanwhile has said they will be sticking with the Congress, but that the BJP has been trying to get in touch with them.

"We have already decided to go with Congress. That's the reason we called Janta Dal (Secular) Legislature Party meeting. There is no question of taking any other decision," the JD(S)'s HD Kumaraswamy told ANI.

I don't know what they (BJP) are offering but they are trying to call our people, but they are not responding. We are all together, no one can touch our party. Our party MLAs are loyal to the party: Saravana, JD(S) #KarnatakaElections2018 pic.twitter.com/3q0OAehwWq

I got a call from the BJP leaders. They said come to us & we'll give a ministry to you. We'll make you a minister. But, I'm going to stay here. HD Kumaraswamy is our Chief Minister: Amaregouda Linganagouda Patil Bayyapur, Congress. #KarnatakaElections2018 pic.twitter.com/BIJYZHV7P7

JD(S) & Congress have the numbers. I hope, the governor will discharge his constitutional duties & invite HD Kumaraswamy to talk. If BJP puts pressure on the governor, it will be the death of Democracy: Danish Ali, JD(S). #KarnatakaElections2018 pic.twitter.com/vNV3EBRAME