Lok Sabha adjourned yet again; no-confidence motion not taken up 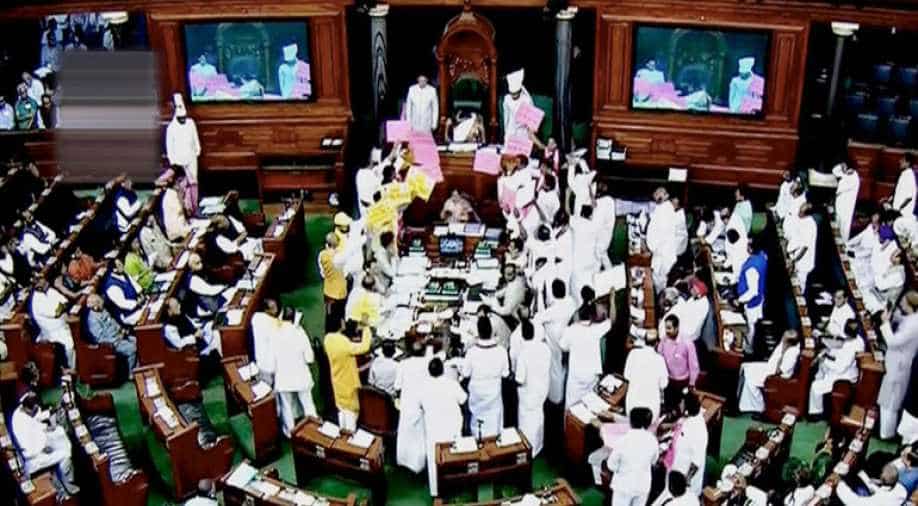 The Lok Sabha was today adjourned following protests by the Opposition over various issues. The Lower House consequently could not take up notices for no-confidence motion against the NDA government moved by Andhra Pradesh parties, with Speaker Sumitra Mahajan saying there was no order in the House and adjourning the proceedings for the day.

The Lower House proceedings were washed out for the 10th consecutive day following incessant protests and sloganeering by various parties, including the TDP, YSR Congress, AIADMK and RJD over multiple issues, including special status for Andhra Pradesh and the banking scam.

Soon after papers and reports were laid during the Zero Hour, Mahajan said she has received a notice for no-confidence motion. "I am duty-bound to bring it... Provided the House is in order," she said amid the din.

"I request all of you to go back to your seats," Mahajan told the members protesting in the Well.

As the members continued with the protests, the Speaker said since the House is not in order, she was unable to take up the notice and then adjourned the proceedings for the day.

The no-confidence motions, moved by YSR Congress and the TDP, were the first in the nearly four-year rule of the BJP-led NDA alliance. The parties have been demanding special status for Andhra Pradesh, an issue on which led the TDP to quit the ruling alliance today.

Congress members were also seen standing at their seats.

Members from the TRS and AIADMK were in the Well holding placards and shouting slogans during Zero Hour.

Soon after the House assembled and was to take up the Question Hour, the proceedings were adjourned till noon and later for the day.

Protesting members from various parties were sporting stoles of multiple colours. While members from TRS were wearing pink ones, those from TDP were seen with yellow stoles. Many AIADMK members, who have been demanding immediate setting up of the Cauvery river management, sported stoles carrying black, white and red stripes.

The House also extended the time for the Joint Committee on the Financial Resolution and Deposit Insurance Bill, 2017 to submit its report.

The House also paid respect to three departed former members and noted cosmologist Stephen Hawking, who passed away this week. Tributes were also paid to nine CRPF personnel, who were killed in a IED blast in Chhattisgarh, on March 13.

The Lok Sabha has been witnessing disruptions on a daily basis ever since Parliament reconvened on March 5 after the Budget Session recess.

On Wednesday amid chaos, the House had passed the Finance Bill and appropriation bills without any discussion.