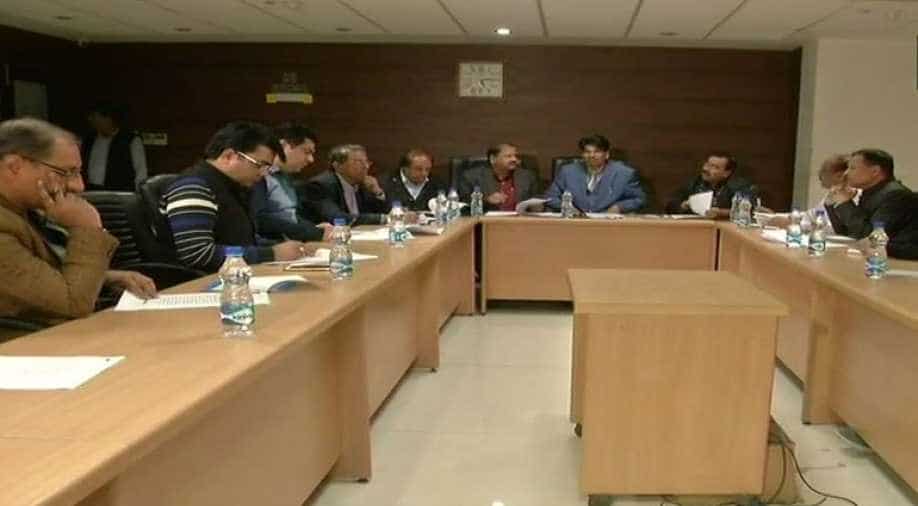 The meeting of Bar Council of India underway in Delhi on the matter pertaining to press conference held by four Supreme Court Judges yesterday Photograph:( ANI )

The Bar Council of India will form a 7-member delegation to mediate with the four Supreme Court judges, who went public about their differences with Chief Justice of India (CJI) Dipak Misra on Friday, in order to find a solution to the issue at the earliest.

The 7-member delegation will meet the four Supreme Court judges.

''We have unanimously decided to form a 7-member delegation of the Council who will meet Hon. judges of the Supreme Court. We want that the matter be solved at the earliest,'' said Manan Kumar Mishra, Chairman, Bar Council of India.

Mishra lamented the fact that the rift in the judiciary had given an opportunity to Rahul Gandhi and other political parties talk about the judiciary.

''We've given an opportunity to Rahul Gandhi & political parties to talk about our judiciary, it's unfortunate,'' Mishra said.

He appealed to the political parties not to politicise the issue.

''On behalf of Bar Council of India, I request him (Rahul Gandhi) and other political parties to not politicise the matter,'' Mishra said.

As far as Memorandum of procedure (MOP) is concerned, it must be finalised at the earliest in a proper manner, he said and added that they will write a letter to the government for the same but is not that big a matter to be brought in public.

He also appreciated the government's stand on the matter by saying that the Prime Minister Narendra Modi and the Law Minister Ravi Shankar Prasad have said that it's the internal matter of the judiciary.

Prime Minister and law minister had said yesterday itself that it is judiciary's internal matter and govt won't be interfering in the matter, and ''we appreciate the government's stand'', he said.

Meanwhile, Supreme Court will not hear PIL seeking probe into the alleged mysterious death of Special CBI Judge BH Loya on Monday, as one of the SC judges M Shantanagoudar is on leave.

On Friday, in an unprecedented development, the top court's four next highest-ranking judges, Justices Kurian Joseph, Chelameswar, Ranjan Gogoi and Madan Lokur, had criticised the distribution of cases by the chief justice to judges and raised concerns about judicial appointments. They said all top judges should be involved in setting the procedures used to hire and promote judges in all the country's courts, they added.

Also read: 'We failed to convince the Chief Justice of India,' say 4 senior judges in first ever open meet

The judges did not give specific details of their concerns during the press conference, but said: "it is an issue of assignment of a case".

When reporters asked whether it was related to the case of a lower court judge B Loya, who died in December 2014 while hearing the sensitive Sohrabuddin Sheikh 'fake encounter' case, one of the four judges said "yes". BJP President Amit Shah is also an accused in the case.