Jind bypoll: An election where national issues are irrelevant 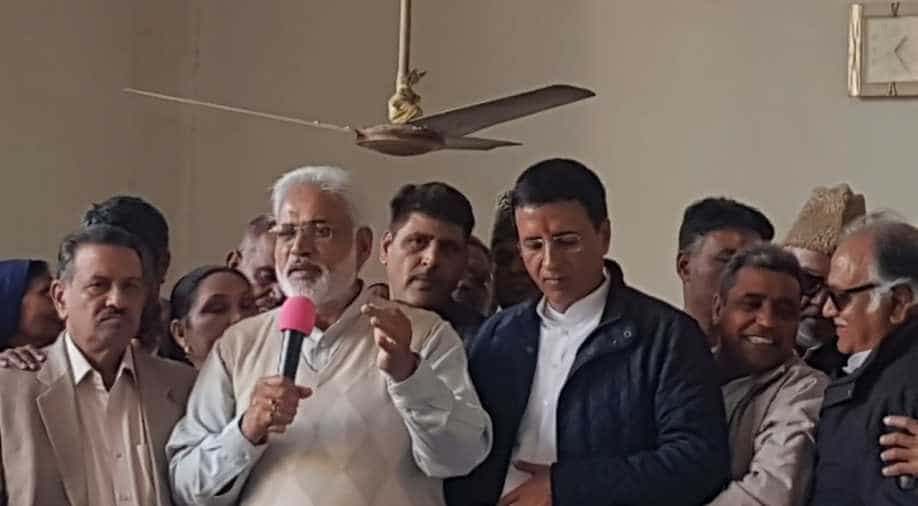 The only way Randeep Surjewala can pull off this election is if Jat vote splits substantially in his favour in addition to Brahmins Photograph:( WION )

With Congress national media head Randeep Surjewala in the fray, Congress has some hope from the election. Without him, Congress would ‘t be in the fray at all.

Jind has become a matter of prestige for political parties in Haryana. Though every election has its own importance, this byelection may impact the fortune of many politicians. It will also influence the way Haryana will vote during Lok Sabha elections and subsequently in the assembly elections too.

With its national media head Randeep Surjewala in the fray, Congress has some hope from the election. Without him, Congress would ‘t be in the fray at all. But, despite that majority of the Jat vote continues to consolidate behind Jannayak Janata Party (JJP) which has fielded Digvijay Chautala, son of Ajay Chautala and grandson of former Haryana chief minister Om Prakash Chautala.

K Midda is BJP’s candidate who is a Punjabi banking on anti-Jat consolidation in the state. Congress, INLD and JJP have fielded Jat candidates in the constituency.

The total number of votes in Jind is roughly 1,69,000 and Jats approximately constitute 45,000 of the pie. BJP’s calculation is that Jat vs non-Jat polarisation would eventually ensure smooth sailing for Krishna Midda as Jat vote would get divided between three candidates and non-Jat would consolidate behind him.

This assessment rests on the fact that another local Jat strongman Jai Prakash has decided to help Congress. Jai Prakash was minister during Chandrashekhar’s government in 1990. He is an independent MLA from Kalayat.

As of now, JJP is well entrenched in the rural areas and if Congress fails to lure substantial Jat vote, it would stand no chance as BJP today in Haryana is not limited to few castes. It is as broad-based as Congress Party.

Randeep will also have to ensure that he gets broad-based support from backward castes.

Congress hopes that rebel BJP MP, Raj Kumar Saini who has fielded a Brahmin candidate would eat into both Brahmin and Saini vote banks substantially.

Bottom line is that Randeep Surjewala does not have a solid vote bank in Jind. He relies on votes from all sections of the society. It is both an advantage and disadvantage. It is an advantage because it allows Congress to get votes from all sections of the society and blunts Jat vs anti-Jat polarization. It is a disadvantage as he does not enjoy basic vote bank, to begin with.

The result will also impact his political future as a loss in Jind would make his position untenable in Kaithal where he draws votes from all sections of the society.

Congress also sufferers from a basic weakness in Jind. The local stakeholders continue to be absent from public platforms during the campaign. Congress is only relying on faces from outside Jind. Though it is the same for every party in the fray as Jind is flooded with politicians from all across the state, but the problem is more acute for Congress as it is organisationally non-existent in the constituency. Congress per se has done nothing under the current state leadership in the last four years to build the organization. It has also not done anything to soften Jat vs non-Jat divide in Haryana. Lastly, urban vote in Jind continues to back BJP candidate.

On the other hand, the message which Congress leaders are banking on is that Randeep is the future chief ministerial candidate who will develop the constituency which looks more like an urban village than a prosperous town. Another advantage he enjoys is that he does not have a Jat ‘strongman’ image which makes him open to other communities.

Digvijay Chautala is only limited to Jat dominated area hence more vulnerable in case INLD intensifies its campaign in the region. As of now, it is advantage BJP in Jind which has immensely benefitted from anti-Jat consolidation throughout the state. BJP has also benefitted because of the work it has done in the government job sector in Haryana. People actually appreciate the fact that one can get a job in the government without any pull and push. This will have a major impact in this election.

The only way Randeep Surjewala can pull off this election is if Jat vote splits substantially in his favour in addition to Brahmins and Saini votes split between BJP and Raj Kumar Saini’s candidate and then if he ends up with votes from the remaining broad cross-section of the society, he will defeat BJP which is in a position of advantage today.

This election has made national issues and leaders irrelevant, but the result will have national impact.