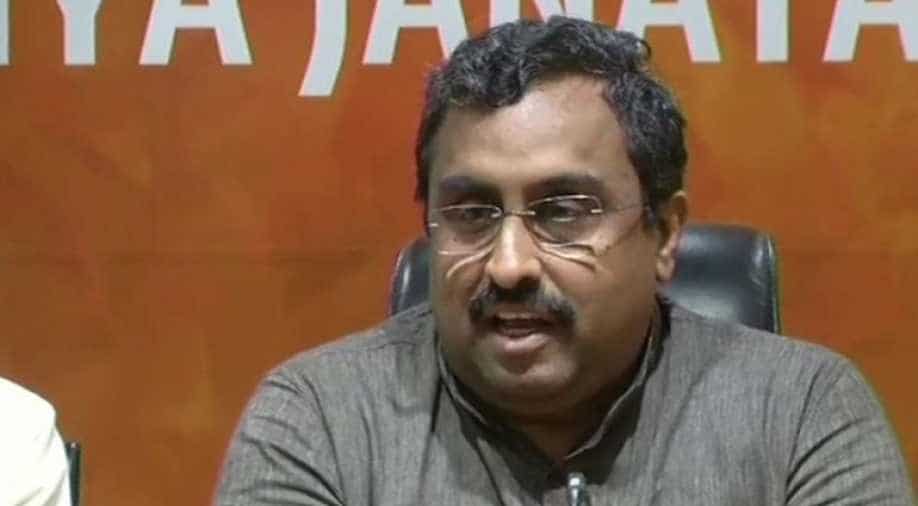 Although under the control of Pakistan, India considers Gilgit-Baltistan a part of the state of Jammu and Kashmir.

India's claim to the Gilgit-Baltistan region is much stronger than Pakistan's as it was handed over to the Pakistani army by two "deceitful" British military officials, BJP leader Ram Madhav said Thursday.

He said the region was strategically important to India as it provides a link to Afghanistan and further to Central Asia. The Belt Road Initiative of China, which has been opposed by India, also passes through this region, he said.

While Pakistan annexed parts of Jammu and Kashmir, the Gilgit-Baltistan region, then a part of the princely state of J&K, was handed over to the Pakistani army by two "deceitful" British military officials, he said.

"Our case, as far as Gilgit Baltistan goes, is even more stronger for the important reason that when (the princely state of) Jammu and Kashmir acceded to India, technically Gilgit Baltistan was an integral part of the then state of Kashmir and Jammu, under Maharaja Hari Singh," Madhav said.

The region was not annexed through any army encroachment, he said.

Madhav was speaking at the launch of a book 'Gilgit Baltistan and its saga of unending human rights violation'.

Although under the control of Pakistan, India considers Gilgit-Baltistan a part of the state of Jammu and Kashmir.

Known as the Northern Areas, Pakistan plans to announce Gilgit Baltistan as its fifth province, a move that is being vehemently opposed by India.

In 1935, with rising Soviet influence and its possible threat to the British Empire, the British took Gilgit Baltistan on lease for 60 years.

After the British terminated the lease, they loaned two of their officers -- Major W A Brown and Captain A S Mathieson -- to the Maharaja for the purpose of looking after the defence of Gilgit-Baltistan till an alternative arrangement was found.

On November 2, 1947, Brown declared that Gilgit was joining Pakistan. Soon after, the Pakistani army and tribals occupied the region and used it as a base to carry out attacks in nearby regions.

"The two British officers had decided that we should hand it over to Pakistan and they invited the Pakistani Army to take it over. It was taken over without any resistance in an illegal manner," Madhav said.

He added that legally, in 1935, the British had taken the region on lease from the then Maharaja and returned to him two days after the partition.

He also rued that there was least awareness about this particular region, five to six times bigger than the PoK.

Hitting out at Pakistan, he said while it has unleashed propaganda and its "proxies within India" over the human right violations, the Pakistani Army has been resorting to genocides and massacres in the Gilgit Baltistan region and the "world at large is silent about it".

Madhav, who was a key negotiators when the BJP and PDP decided to form a coalition government in the state, said one of the clauses in the Common Minimum Programme was to open a trade route from Kargil to Skardu, a town in the Gilgit-Baltistan region.

"We attach great significance to the issue of Gilgit Baltistan," he said.