India will take a decision on import of Iranian oil after polls: Swaraj 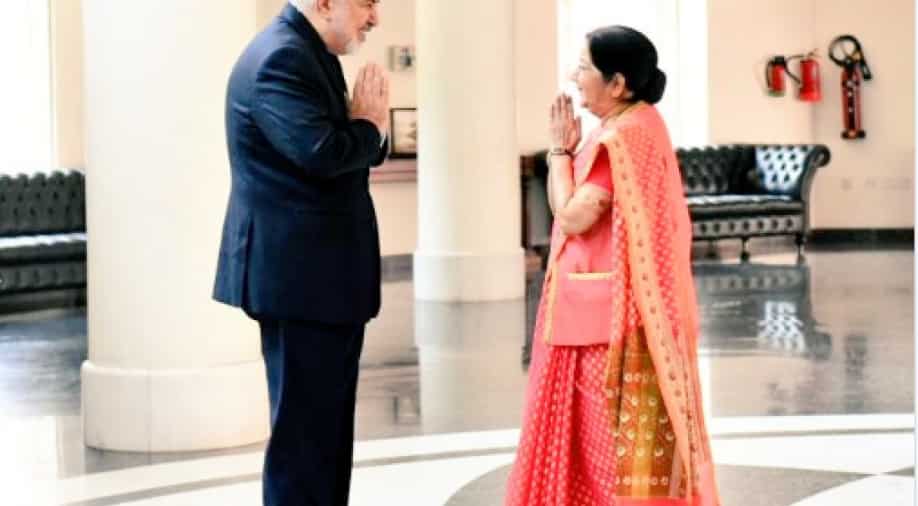 Zarif's visit to India came amid escalating face-off between Iran and the United States on Tehran's nuclear programme.  Photograph:( Twitter )

The talks between the two foreign ministers came 12 days after the US ended six-month-long exemptions from sanctions to India and seven other countries to buy oil from Iran.

External Affairs Minister Sushma Swaraj Tuesday held "constructive" talks with her Iranian counterpart Javad Zarif and conveyed to him that India will take a decision on import of Iranian oil after the Lok Sabha polls, keeping in mind its commercial, economic and energy security interests.

The talks between the two foreign ministers came 12 days after the US ended six-month-long exemptions from sanctions to India and seven other countries to buy oil from Iran.

In a tweet, External Affairs Ministry Spokesperson Raveesh Kumar described the discussions between Swaraj and Zarif as "constructive".
"EAM @SushmaSwaraj and Iranian Foreign Minister @JZarif held constructive discussions on all bilateral issues of mutual interest. Good exchange of views on the evolving regional situation, including Afghanistan," he said.

Official sources said Swaraj reiterated the position that a decision will be taken after the elections based on commercial considerations, energy security and economic interests.

In the meeting, Zarif recalled the steps announced by President Hassan Rouhani on May 8 including decisions linked to the export of enriched uranium and heavy water, the sources said.

The Iranian Foreign Minister also mentioned that 60 days timeline has been given to EU-3 and other parties to Joint Comprehensive Plan of Action, or JCPOA for restoring Iran's oil and banking channels, the sources said.

In a televised address, Rouhani had on May 8 said that Iran would suspend some parts of its "commitments" to the JCPOA, but will not fully withdraw from it.

In the meeting with Zarif, the Indian side reiterated its position on JCPOA and said New Delhi would like all parties to continue to fulfill their commitments and that they should engage constructively to the issues peacefully, the sources said.

They said the visit took place at Zarif's own initiative to brief India on the Iranian approach to the recent developments in the region, including on JCPOA, and to review bilateral cooperation.

"This was part of their consultation with other countries in the region including Russia, China, Turkmenistan, and Iraq over the last few days," said a source.

In the meeting, Swaraj and Zarif shared their views on the situation in Afghanistan and agreed to maintain close coordination on the evolving situation, the sources said.

They said both sides expressed satisfaction at the operationalisation of the interim contract on the Chabahar port between India Ports Global Limited (IPGL) and Ports and Maritime Organization (PMO).

The US sanctions on Iran is unlikely to impact the Chabahar port project.