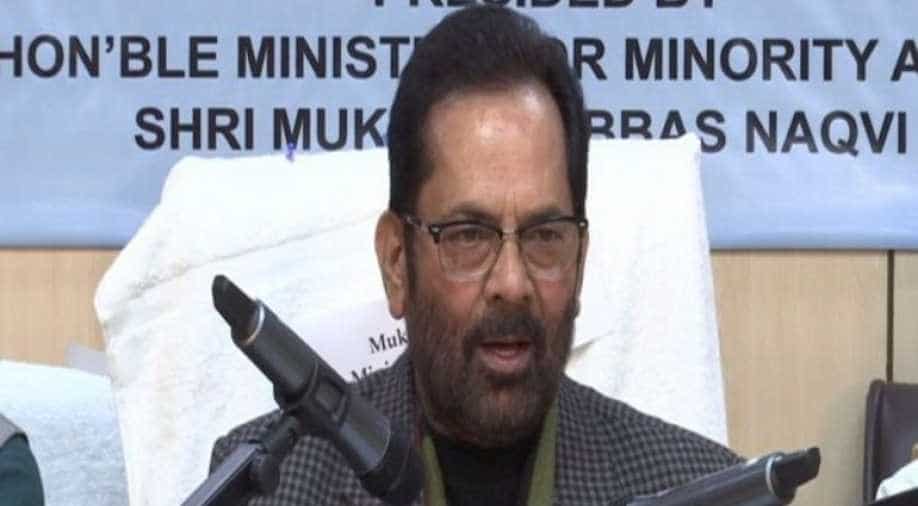 Amid the raging protests over the Citizenship (Amendment) Act (CAA), Union Minister for Minority Affairs Mukhtar Abbas Naqvi on Wednesday stated that "India is a heaven, while Pakistan is a hell for the minorities".

Speaking on the occasion of International Minority Rights Day, Naqvi said: "The minorities in the neighbouring countries have suffered several difficulties, including forceful conversion of religion."

He further stated that there was a conspiracy to create a hateful and toxic environment in the country.

"After CAA was passed, the environment which has been created in the country has been done with a very dangerous mentality. Attempts have been made to divide the country on a social level. Some people have assumed that Muslims cannot live in India, which is untrue. This poisonous environment is fake and fabricated," said Naqvi.

Naqvi further clarified that the Muslim population who have been living in the country for years have nothing to fear from the amended citizenship law.

"The citizenship of Muslims in India is safe and protected. It is our responsibility to spread awareness about the Act, and fight the conspiracy which seeks to disturb the peace of the nation," he said.

Meanwhile, BJP National Spokesperson Shahnawaz Hussain on Wednesday stated that Congress should stop misleading the Muslim population of the country regarding the citizenship law.

"The Act has been introduced to grant citizenship to people, not seize it. Congress has been spreading rumours and lies about the law, which is very unfortunate. We will not let them mislead the Muslims. I appeal to my Muslim brothers to stand against this false information, which has been confusing and misleading them," said Hussain.

"Malik is crossing his limits. These kinds of statements will not be tolerated. General Dyer gunned down hundreds of people, while the CAA does not cause harm to any citizens of India. The opposition is confused and divided over the issue," he asserted.

The CAA seeks to grant Indian citizenship to refugees from Hindu, Christian, Sikh, Buddhist and Parsi communities fleeing religious persecution from Pakistan, Afghanistan and Bangladesh, and who entered India on or before December 31, 2014.