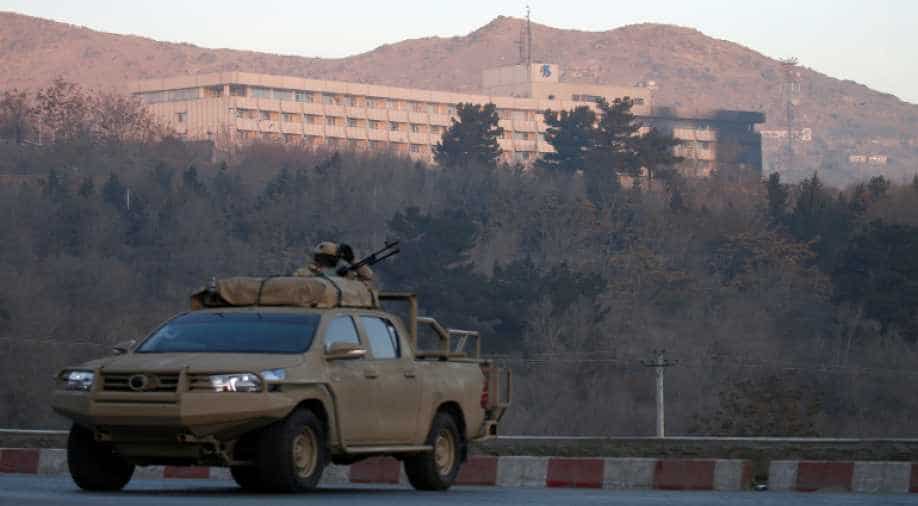 'Reports about attack having being carried out by terrorists of internationally proscribed Haqqani Network are a matter of serious concern...' the statement added. Photograph:( Reuters )

India on Sunday strongly condemned the terrorist attack on the Intercontinental Hotel in Kabul, which claimed 18 lives."We express our sincere condolences to the families of those killed in this heinous attack and wish speedy recovery to the injured," the Ministry of External Affairs (MEA) said in a statement.

"Reports about attack having being carried out by terrorists of internationally proscribed Haqqani Network are a matter of serious concern and bring to fore once again the need to effectively deal with safe havens and sanctuaries that these terrorists find in our shared neighbourhood," the statement added.

Furthermore, India expressed solidarity with Afghanistan in bringing the perpetrators of these terrorist attacks and their supporters to justice.

Gunmen stormed the heavily-guarded hotel located on a hilltop in the Bagh-e Bala area late on Saturday setting off a gun battle with security forces that continued into Sunday morning.

Afghan President Ashraf Ghani on Sunday condemned the attack and called for regional and international cooperation against terrorism.

Chief Executive Abdullah Abdullah also condemned the attack and commended security forces for saving people trapped inside the hotel during the attack. "I commend the Afghan Forces for their bravery and professional action of rescuing over 100 civilians and killing all terrorists in the insane attack on Intercontinental Hotel in Kabul. I condemn the attack and condole with the victim families," Abdullah wrote on Twitter.

According to Interior Ministry spokesperson Najib Danish, around 100 guests and staffers were rescued, of which 16 of them were foreign nationals.

He said all those who had died or were wounded had been Afghan nationals. The Interior Ministry also dismissed reports of a hostage situation.The Taliban claimed responsibility for the attack. The attack comes just days after the US embassy in Kabul issued a warning about possible attacks on hotels in the city.