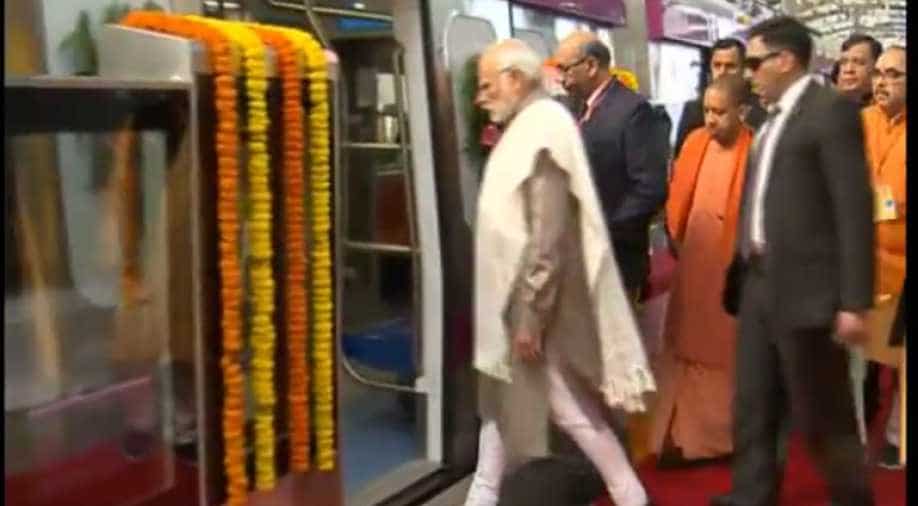 Prime Minister Narendra Modi on Monday advocated the use of public transport to save on fuel and costs associated with the import of petroleum, saying travelling on a metro train should be a "prestige issue".

Addressing a rally after inaugurating a 12-km stretch of Delhi Metro's Magenta Line, PM Modi said governments incur a lot of cost in creating infrastructure but when it is ready it benefits generations to come.

Modi said by 2022, when India celebrates its 75 years of Independence, he wants to cut down on imported petroleum products.

He said a multi-modal transportation system will ensure that use of fuel is cut down, which will help the common man save money and also be useful for the environment.

On December 24, 2002, then prime minister Atal Bihari Vajpayee took a ride on the metro, Modi recalled. "It was a historic moment. Since then, the Metro network in NCR has expanded considerably," he said.

We live in an era in which connectivity is all important, the prime minister said.

"Without connectivity, life comes to a standstill. This Metro... is not only for the present but also for future generations," he said.

There was need to change the mindset so that people prefer using public transport than their private vehicles, the PM said, adding that travelling on a metro should be a "prestige issue".

The 12.64-km stretch, which was inaugurated by PM Modi today, runs between Kalkaji and Noida's Botanical Garden and accounts for a travel time of 19 minutes, thus facilitating easy access for commuters from South Delhi to Noida, and vice versa. UP Governor Ram Naik and Chief Minister Yogi Adityanath were present at the inauguration function.

The coaches on th new Magenta Line will have an LED display, power charging capacity and colourful seats, while the stations will portray themes of nature, yoga, and cultural landmarks. The Magenta Line also marks the usage of the first platform screen doors (PSDs), which are glass-made screens installed near the edge of platforms that open only when a train arrives and shut after it departs.