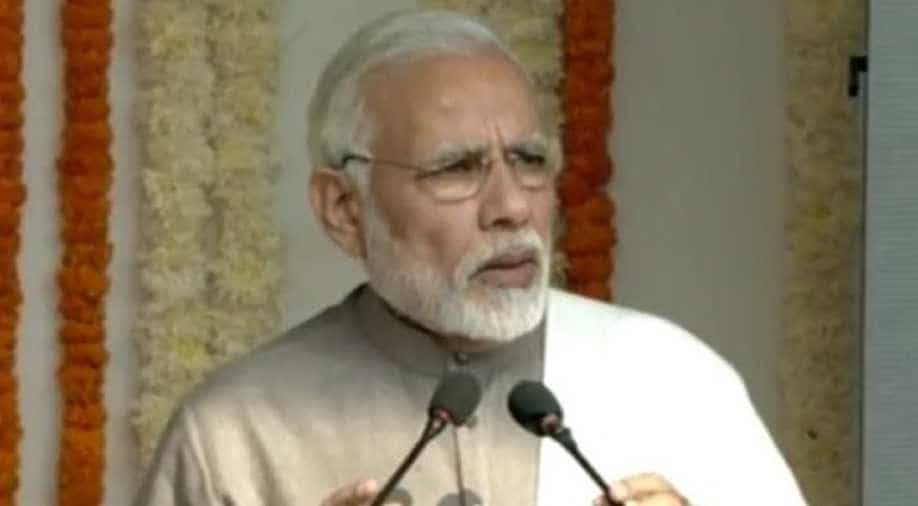 Travelling in metro should become 'status symbol'. People should take pride in it -- PM Modi

Good governance is the only way to tackle corruption and scale new heights of development -- PM Modi.

When I became CM, ppl told me of a few places where no CMs went because they were inauspicious. I was clear I would go to all those places in my first year itself. There were superstitions associated w/Noida & in his own style,Yogi Adityanath Ji rose above them & came to Noida-PM pic.twitter.com/4agNoWadHz

Governance cannot happen when the dominant thought process begins at 'Mera Kya' and ends at 'Mujhe Kya.' We have changed these mindsets. For us, decisions are about national interest and not political gains: PM Modi in Noida pic.twitter.com/HGDxhDdpt8

There are ample of unnecessary laws. We have scrapped close to 1,200 laws. Good governance needs fewer but effective and stringent laws -- PM Modi.

Pradhan Mantri Gram Sadak Yojna is providing the nation with good roads. We promise, by 2019, every village will have good, concrete roads.

This nation needs good-governance. Attitudes need to be changed. I have decided to take the responsibility to change the attitudes, to change the nation -- PM Modi.

Shri Vajpayee Ji was the first one among us to take a metro ride, it has been 15 years now. Metro is growing throughout the nation -- PM Modi.

24th December 2002...Atal Bihari Vajpayee Ji took a ride on the metro. This was a historic moment. Since then, it has been 15 years & the Metro network in NCR has expanded considerably: PM Modi pic.twitter.com/m6NvVhviyG

Travelling in metro should become 'status symbol'. People should take pride in it -- PM Modi

Can we reduce the amount of oil we are importing? Our demands are increasing. Rapid transportation will help us and save our resources -- PM Modi.

In 2022, when we mark 75 years of freedom, I dream that we live in an India in which our petrol imports reduce. In order to achieve this, state of the art mass transit systems are the need of the hour: PM Modi in Noida

Today is Christmas & it is also the birthday of Shri Atal Bihari Vajpayee, I thank PM for giving Uttar Pradesh the offering of this new metro line on this occasion: UP CM Yogi Adityanath

"The flagging-off of this phase of Magenta line brings closer our dream of boosting Noida and Greater Noida's development," Yogi Adityanath.

This step (inauguration of Metro's magenta line) will prove to be a milestone towards realizing the dreams of development for Noida & Greater Noida region: UP CM Yogi Adityanath pic.twitter.com/U9w5CisOHt

Noida: PM Narendra Modi inaugurates a stretch of the new Magenta line of the #DelhiMetro. The line connects Botanical Garden in Noida with Kalkaji Mandir in Delhi. pic.twitter.com/d1K7l1URmM

#WATCH PM Narendra Modi at inauguration of a stretch of the new Magenta line of the #DelhiMetro https://t.co/WcuRyyVKHH

The new route is expected to cut down the travel time between south Delhi and Noida by as much as 40 minutes.

Post-inauguration, the metro will be open to the general public after 5 pm.

Noida: PM Narendra Modi onboard #DelhiMetro after inauguration of a stretch of the new Magenta line. The line connects Botanical Garden in Noida with Kalkaji Mandir in Delhi. pic.twitter.com/oEzY4f66wi

PM Modi will be taking a metro ride to Okhla Bird Sanctuary metro station after which he will inaugurate the metro line and address the public.

The new 12.64-km route -- from Delhi's Kalkaji Mandir to Noida's Botanical Garden -- is expected to cut travel time from south Delhi to Noida by as much as 40 minutes.

Uttar Pradesh Chief Minister Yogi Adityanath will be present at the inauguration.

Delhi Chief Minister Arvind Kejriwal however has not been invited.

Delhi's AAP government is currently locked in a bitter battle with the Centre over recent Delhi Metro fare hikes.

One of the trains on the new line had had an accident recently.

Delhi Metro had later said the fault had not been with the train and that the accident had been caused by human error.

It said the driver parking the metro train had forgotten to engage the brake, which caused it to roll back and crash through a wall of the Kalindi Kunj depot.

Delhi Metro has also said that while the metro trains will be "driverless", a human operator will be present in the driver's cab for the first two to three years of operations.

Adityanath had arrived in Noida Saturday to oversee preparations for the inauguration -- Noida residents said the town looked spruced up -- breaking the "Noida jinx" in the process.

The jinx is believed to cause Uttar Pradesh chief ministers who visit the city to lose the following elections.

After the inauguration, Modi will also address a public gathering at Noida's Amity University.

Delhi's first metro line had also been inaugurated on Christmas day 15 years ago in 2002 by then prime minister Atal Bihari Vajpayee.