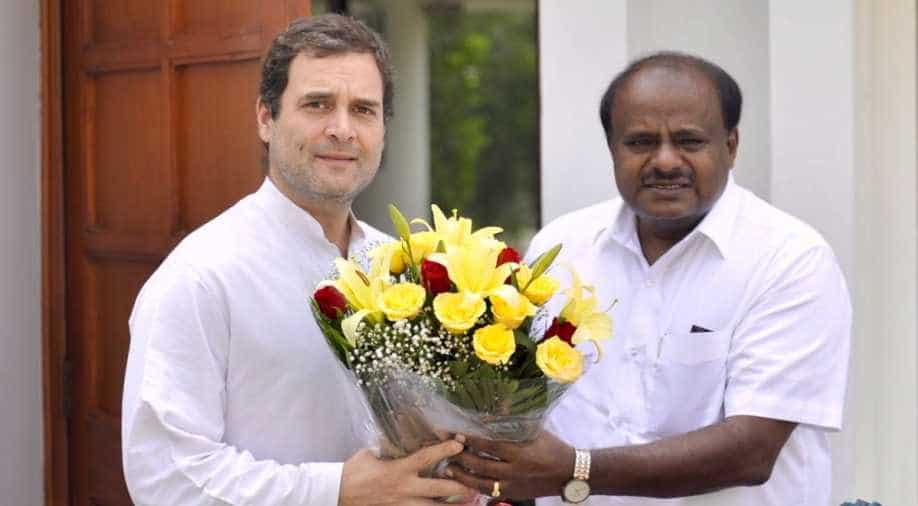 The chief minister also said that the JD(S)-Congress coalition government is secure under the leadership of senior Congress leader and former chief minister Siddaramaiah.

In a brief meeting with the Gandhi at his residence, Kumaraswamy also apprised him about the 100-day performance of the coalition government.

"In the meeting, I have requested Congress President to take early decision on expansion of the cabinet and appointment of corporation Boards chairman," Kumaraswamy told reporters after the meeting.

At present, the cabinet comprises 16 Congress and 10 JD(S) members, including chief minister and deputy chief minister, and as per rule four more can be added, one from JD(S) and three from Congress.

Kumaraswamy's discussions with Gandhi also comes on the eve of the JD(S)-Congress Coordination Committee meeting scheduled tomorrow to iron out differences in the alliance that has arisen after Siddaramaiah's remarks about becoming the state chief minister.

Asked about the remarks, he said: "He (Siddaramaiah) is a leader. If he expresses desire to become CM, what's wrong in that."

Already, Siddarmaiah has given clarification that he would become the chief minister if people desire in the next election, the CM said.

"Despande (senior Congress leader) too may have desire to become chief minister. There is no need to interpret and understand it in a different way," he added.

R V Despande is a Revenue Minister in the coalition government in Karnataka.

Asserting that the coalition government was successful in completing 100 days in the state, the chief minister said: "People in the state have various expectations. My first goal is to fulfill their expectations in the coming days."

The 100 days of honeymoon period is over and the government will start implementing the blueprint in the coming days, he added.

The chief minister further said that the government was successful in taking officers into confidence. They have to work considering the wavelength of the coalition government, he added.

Already, the government has announced farm loan waiver and given certain directions to officials to implement the budget proposals, he stressed.