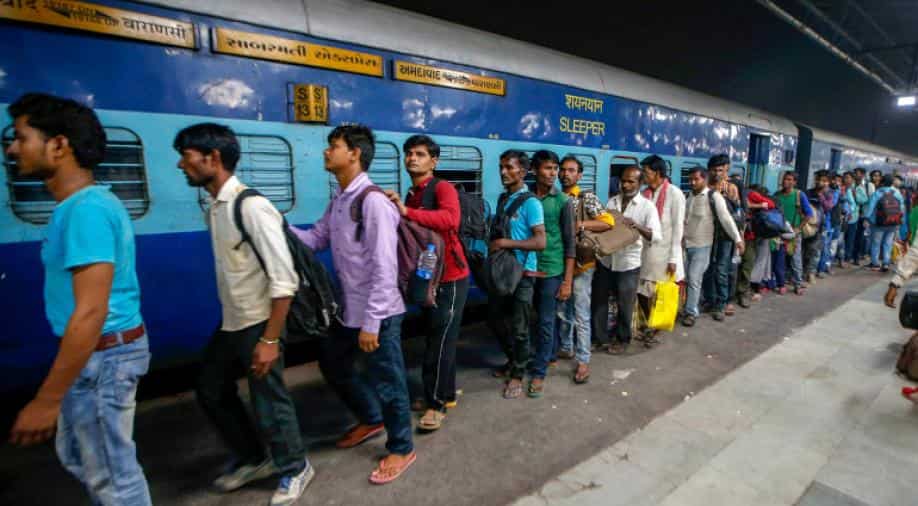 Migrant workers prepare to board the Sabarmati Express in Ahmedabad on Monday night. Photograph:( PTI )

The attacks on Hindi-speaking migrants followed the rape of a 14-month-old toddler, allegedly by a migrant worker from Bihar. Gujarat CM Vijay Rupani said Monday that the situation is now under control.

Gujarat Chief Minister Vijay Rupani Monday appealed to people not to engage in violence, even as a north Indian outfit claimed over 20,000 Hindi-speaking migrants fled the state in the last one week after a spate of attacks following a rape incident.

Rupani claimed that no untoward incident had taken place during the last 48 hours, while state Home Minister Pradeepsinh Jadeja said additional forces have been deployed in industrial areas for the security of migrants.

Since the alleged rape of a 14-month-old girl in Sabarkantha district on September 28, six districts, most of them in north Gujarat, have seen sporadic incidents of violence against Hindi-speaking people, police had said.

The government said more than 400 people have been arrested in connection with the violence which started after a migrant worker from Bihar was nabbed in the rape case.

"Over 20,000 migrants from these states have fled due to fear as Hindi-speaking people are being attacked in different parts of the state. All non-Gujaratis should not be seen as culprits for the misdeeds of one person," he said.

Rupani said the situation has been brought under control by police.

"We are committed to maintaining law and order, and people can call police in case of trouble. We will provide them security," Rupani said in Rajkot.

Minister of State for Home Jadeja, at a press conference Monday in Gandhinagar, said the Centre had been apprised of the steps taken by the Gujarat government to bring the situation under control. He said 431 people have been arrested and 56 FIRs registered in connection with the attacks on Hindi- speaking people.

Without naming opposition Congress, Jadeja said efforts were underway to find out whether "it is a conspiracy by those who are out of power in Gujarat since the last 22 years".

"The attack on migrant workers is highly condemnable. The chief minister has instructed us to take all necessary steps to stop the attacks.

"I also appeal people not to be misled by those who are inciting people for their political gains," Jadeja said.

While police have arrested several members of the Thakor Sena in connection with the attacks and also mentioned the outfit's name in some of the FIRs, its president and Congress MLA Alpesh Thakor alleged that youth from the community were being falsely implicated.

Senior Congress leader Ahmed Patel on Monday defended party MLA Alpesh Thakor after members of an outfit which he leads were arrested in connection with the attacks on Hindi-speaking migrants in Gujarat and alleged that the BJP government was trying to politicise the issue.

"Alpesh Thakor has clearly denied his role in these attacks on migrant workers," said Patel.

Meanwhile, a political dimension to the attacks was also injected with a leader of the JD(U), which is headed by Nitish Kumar, dashing off a two-page open letter to Congress president Rahul Gandhi, blaming his party for the violence against Biharis.

"You appointed your Gujarat MLA Alpesh Thakor as one of the national secretaries in-charge of Bihar and his outfit Gujarat Kshatriya Thakor Sena is driving out migrant Biharis," Neeraj Kumar, JD(U) MLC and spokesman, alleged.

Uttar Pradesh Chief Minister Yogi Adityanath said the Gujarat chief minister told him that his government has ensured the safety of all and that are all welcome.

Rupani also informed there had not been any incident since the past three days and he has also appealed to people against paying any heed to rumours, Adityanath told reporters in Lucknow.

Adityanath said Gujarat is a peace-loving state and a model of development and that those do not want development spread rumours.

"Some North Indians living there had called me and I have told them also not to pay heed to the rumours.," he said.

50% migrant workers not reporting to work

Meanwhile, the Gujarat Chamber of Commerce and Industry (GCCI) has urged Chief Minister Vijay Rupani to step in to restore peace in the state. GCCI president Jaimin Vasa claimed that 50 per cent of migrant labourers had stopped coming to work at factories in many industrial estates in Gujarat.

According to G K Patel, president of Dediasan industrial estate in Mehsana, around 1,000 migrant workers have gone back to their native states.

"There are around 400 factories in this estate. These factories employ around 2,000 migrant workers. Out of these, some 1,000 have left work and have gone back to their native places" claimed Patel.