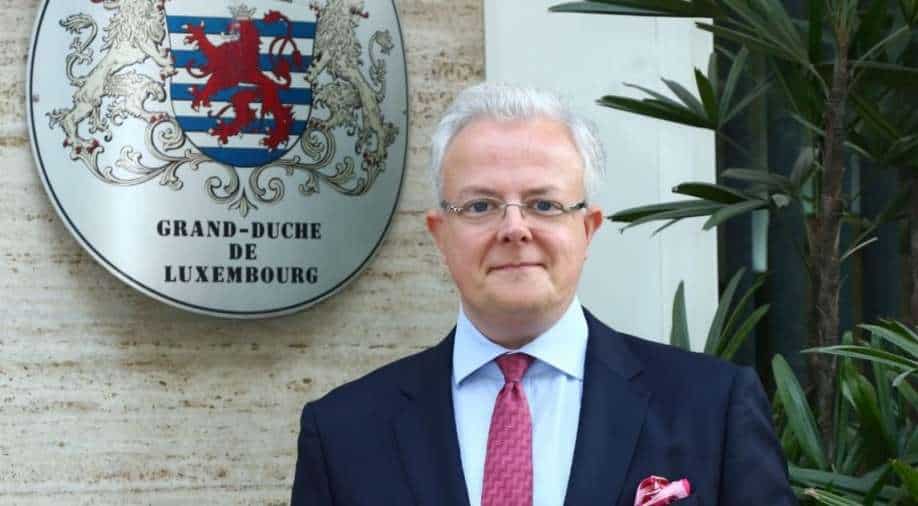 The Ambassador of the Grand Duchy of Luxembourg to India Mr. Jean Claude Kugener has said that both countries are coming closer in a number of sectors from space to education to IT and green and sustainable economies. Speaking exclusively to our Principal Diplomatic Correspondent Sidhant Sibal, Ambassador Kugener said, "I am convinced that there are also many ways of cooperation between #DigitalLuxembourg and #DigitalIndia. The country has Europe’s highest concentration of top-rated Tier IV datacentres”.

WION: What are the key outcomes of the recent India - Luxembourg bilateral Summit?

Jean Claude Kugener: The recently held virtual Summit between the Prime Minister of the Grand Duchy of Luxembourg, H.E. Mr. Xavier Bettel, and the Hon’ble Prime Minister of India, Shri Narendra Modi, was the first of its kind and offered an excellent occasion to discuss bilateral relations and further strengthen the dynamic cooperation between both countries. The tangible outcomes are three MoUs that have been signed-in the context of this summit. The two agreements of the Luxembourg Stock Exchange (LuxSE) with the India International Exchange (India INX) and the State Bank of India (SBI) aim at increasing the cooperation in the financial services industry with a focus on green and sustainable Finance. The third MoU signed between the CEO’s of Luxinnovation GIE AND Invest India will support and develop mutual business cooperation between companies of the two countries. Other planned MoUs in Space, Higher Education, and among the Regulators are being processed and will be signed in the coming weeks.

Prime Minister Bettel also announced Luxembourg’s intention to join the International Solar Alliance underlining the government’s commitment to promoting the use of clean energy. Both Prime Ministers also welcomed the institutionalisation of regular bilateral consultations between the Ministry of External Affairs of India and the Ministry of Foreign and European Affairs of Luxembourg. The Prime Ministers agreed that the bilateral relations have significantly evolved and diversified since the diplomatic relations establishment in 1948 and the opening of the Luxembourg Embassy in New Delhi in 2002. The economic and trade cooperation between Luxembourg and India has been growing consistently. As per the Indian statistics, Luxembourg is the 15th Foreign Direct Investor in India compared to 16th in 2018 and 28th in 2005. Both leaders have acknowledged the high potential to further deepen the cooperation in Trade, Finance, Steel, Space, ICT, Innovation, and Sustainable Development, among others.

WION: What are the other key areas of collaboration?

Jean Claude Kugener: In addition to the cooperation mentioned previously, our countries have a strong cooperation in steel, which is at the origin of the creation of the first Vice-Consulate of the Grand Duchy in Bombay in 1929. In the 19th century, Luxembourg was the 6th largest cast iron and 8th largest steel producer in the world. Today the world leading steel and mining company ArcelorMittal, headquartered in the Grand Duchy since its merger in 2006, currently develops its presence in India through AMNS, following its takeover of Essar Steel. The Paul Wurth Group, a leading player in the design and supply of technological solutions in the primary stage of integrated steelmaking, has been active in India for 27 years and has worked with many Indian steel producers over the last decades.

Allow me to highlight other Luxembourg companies which are also contributing to the “Make in India”: Ceratizit, which enlarged its presence in India through a new manufacturing facility in Karnataka last year apart from its existing operations in West Bengal, manufactures hard cutting materials for different industries or Rotarex in Mumbai producing high performance valves, regulators and fittings for all gas applications and currently expanding its presence in Navi Mumbai. The Luxembourg-Indian Joint Venture Amer-Sil Ketex in West Bengal is producing highly sophisticated gauntlets among others for the automotive industry for South Asia. They are the largest producer of Tubular bags in India. Our countries are also cooperating in Space and the Luxembourg company SES, the world leader in operational satellites, has partnered with ISRO for many years and is currently operating 5 satellites over India. The government decided to become a leading player in the space industry and the launch of the Luxembourg Space Agency in 2018 following the SpaceResources.lu initiative in 2016, created an environment enabling companies to research and invest in space ventures with the aim of making them both economically viable and environmentally sustainable.

Today, Luxembourg hosts over 60 companies, public and private, active in the space sector. One of them, the Luxembourg based Kleos Space S.A. recently launched 4 nanosatellites into orbit through the PSLV C49 mission of ISRO. A cooperation in space which will further grow in the decades to come. Also discussed during the summit was our cooperation in IT, digital and the emerging technologies. The IT companies present in Luxembourg have been expanding over the last years and decades and the statistics talk for themselves. We also see this impressive evolution in the increasing number of Schengen visas that our Consulate in Delhi is issuing for Indian citizens working in this area. It is not without any surprise that our consulate ranked number one of all the Luxembourg consulates in terms of issuance of Schengen visas in 2019. In this context, allow me to mention that Luxembourg is often referred to as a start-up gateway to Europe. The activities of #DigitalLuxembourg, launched in 2014, range from Indutech to eco-innovation technologies to Health tech and offers a wide range of initiatives to assist start-up businesses. I am convinced that there are many ways of cooperation between #DigitalLuxembourg and #DigitalIndia.

The priority sectors in Luxembourg of the strategy Industry 4.0 (clean technologies and smart mobility, health technologies, space, logistics and financial services) have information and communication technologies as well as the use of data as their common denominator. They benefit from the country’s state of the art infrastructure for the data storage and handling, which includes Europe’s highest concentration of top-rated Tier IV datacentres and exceptional connectivity secured by very fast, ultra-low-latency connections. Widely recognised as a centre of excellence in cybersecurity, Luxembourg is as well at the forefront in fields such as electronic identification and the development of secure data lakes. Another area of cooperation, to name but a few, is Education as the University of Luxembourg has a number of MoU’s Indian Institutes of Technologies and various Universities which are in the process to be reviewed and renewed. I am delighted that we will see a stronger cooperation in this area as well in the years to come.

WION: And your cooperation in the green and sustainable economies?

Jean Claude Kugener: Our cooperation in this area is increasing and I highlight as an example the Luxembourg-headquartered company Boson Energy, which provides thermal treatment solutions that produce local clean energy from locally available fuels such as waste and biomass residue and is actively cooperating with the Clean Ganga project. Another Luxembourgish firm, Solarcleano recently exported its first solar panel cleaning robots to Mumbai. In our financial relations, sustainable and green finance is an area of cooperation which is going to be very promising in the coming years.

WION: How is a Luxembourg company helping with the Covid vaccine refrigeration?

Jean Claude Kugener: This new cooperation is another excellent outcome of the summit which results from the Prime Minister’s discussions. The Luxembourg-based company B Medical Systems, a pioneer in the medical equipment industry, is a global leader in the vaccine cold chain since 1979 and specialises in R&D and the manufacturing of high-quality refrigerators, freezers, storage, and solutions for safe blood, vaccine, and other temperature-critical cargo transport solutions.

I had the pleasure to welcome the Deputy CEO of the company in September at the Embassy to discuss the company’s cooperation with India. On this occasion, M. Jesal Doshi, a Mumbai native, donated a refrigerator for the storage of critical Covid19 vaccines to the BYL Nair Charitable Hospital in Mumbai. Currently, the CEO, Mr. Luc Provost, and the Deputy CEO are in India to discuss further strengthening and new avenues of cooperation. Taking into consideration the timely important and crucial feature of vaccine refrigeration, I am extremely happy with the proactive response received from the various authorities, the continued assistance by the designated Ambassador of India to Luxembourg and of our colleagues at the Ministry of External Affairs following the Prime Minister’s discussions during the summit.