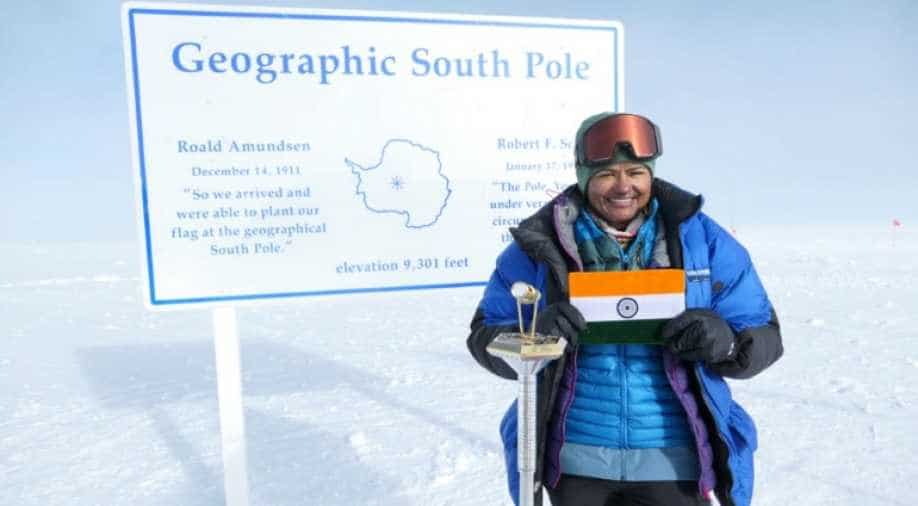 'Like I believe age is just a number, so I believe dreams have no gender. My message to all women is to dream, have a vision and fulfil that dream with perseverance by never giving up,' Aparna told WION.

Aparna Kumar, the first Indian woman police officer to reach the South Pole, talks to WION's Ayushi Agarwal about her inspiration (her mother) and the brains behind her expeditions (her husband). Age should not hold you back, she says, nor should gender. But most importantly, she tells Indian women that sports is in no way a male doman. Dream it and do it, she says. Excerpts from their conversation:

WION: How did the idea of reaching the South Pole come to you?

Aparna: The journey actually started in 2013 when I was posted as the Commander of 9th battalion PAC (previously known as Special Police Force in Moradabad, Uttar Pradesh. It used to take care of high altitudes of Uttarakhand along the Indo-Tibetan border (like Kedarnath, Badrinath and many others). People used to tell me about their adventurous stories and their experiences on walking on snow and pulling their own sledge full of luggage. It really made me curious. I thought of giving it a try as I have been good with sports in the past. The curiosity and my interest made me take the task up.

WION: Tell us about your training for the expedition.

Aparna: I took basic mountaineering course from Manali in 2013. I just thought of learning the basics and didn't have any climbing plans. I was adjudged with A grade, which made it possible for me to pursue an advanced mountaineering course which I completed in July 2014. The course made me eligible for expeditions. Shortly after, my training began. I knew I had to be physically and mentally strong as the task demands a lot of vigour.

WION: Your inspiration behind the arduous task?

Aparna: My mother is my inspiration, she is a very strong lady. Other than her, what adds glory to my endeavours is my husband's support who encourages me a lot.

WION: How did you juggle your profession with this expedition?

Aparna: Its tough, obviously, it is like walking on both the edges of life. As a mother of two, I have responsibilities of both profession and family on my shoulders. But I know how to manage time. My well-wishers, friends, and family have made my life smoother. But when I first thought of climbing, I informed my husband of joining basic mountaineering learning. He just told me one thing that keeps me going smoothly in life which was, ''As an IPS officer, it is your responsibility of completing whatever task has been assigned to you. So you have to complete the whole learning process and do not have to think of giving up at any point.'' This really made my life easier.

WION: What was the most challenging moment in your journey? Had you ever thought that you may not achieve what you set out for?

APARNA: The most challenging moment that I faced was regarding my health issues. When I was getting trained for the South Pole, I was suffering from fever, cough and cold. After a few X-rays and reports, I was diagnosed with pneumonia. I became restless as I had to leave for Chile on 30th December. I was worried and put on medication for 20 days and was given pneumonia drugs. I was asked not to get trained and exercise till then. So the whole month of November was very challenging. The other challenge that I had to face was during my training of skiing. As for the South Pole expedition, skiing is basic and so I had to learn cross-country skiing for which I went to Gulmarg.  So before going, it was tough. And when I was in the South Pole, the temperature was around -35 degree Celsius which made the conditions more different as I was the only woman among the seven team members. But this did not at any point make me think of giving up for what I planned for. I was determined and focused. This kept me going in spite of challenges.

WION: How did your family and friends react to the idea when it was first conceived? Did they feel differently?

APARNA: My family supports and encourages me in everything I do. This diehard resolve that I have is because of them. They are the reason behind my physical endurance and mental toughness. Yes, they felt differently as I spoke about my idea but there were no signs of doubt of my determination. What satisfies me a lot is my children's reaction (Spandana and Neelkantha). They jump in joy as I am sometimes invited as a chief guest in their school which expands their friends circle (which sounds so funny).

WION: Who is the brain is behind all your expeditions? And what are your future expedition plans?

APARNA: My husband is the brain behind all my expeditions. Out of seven continents, I have covered six highest peaks. The one which is left is Mount Denali in Alaska, North America which I am planning to climb next year. But before that, I am aiming for the North Pole expedition.

WION: What is the best quote in life that you believe in and which inspired you to climb the South Pole?

APARNA: The quote that I firmly believe in is that "Age is just a number, you should never give up and always work hard in whatever you think and believe in.''

WION: How did it feel, unfurling the ITBP flag at the South Pole?

APARNA: The feeling was inexplicable. I was relieved and glad that I converted my thoughts into actions. Unfurling the flag there was the most immense joy because I represented and made proud those people who helped me a lot during my entire journey.

WION: What is the one message that you want to give women who do not turn their thoughts into action as they think society believes sports is a male-dominated arena?

APARNA: Like I believe age is just a number, so I believe dreams have no gender. My message to all women is to dream, have a vision and fulfil that dream with perseverance by never giving up.