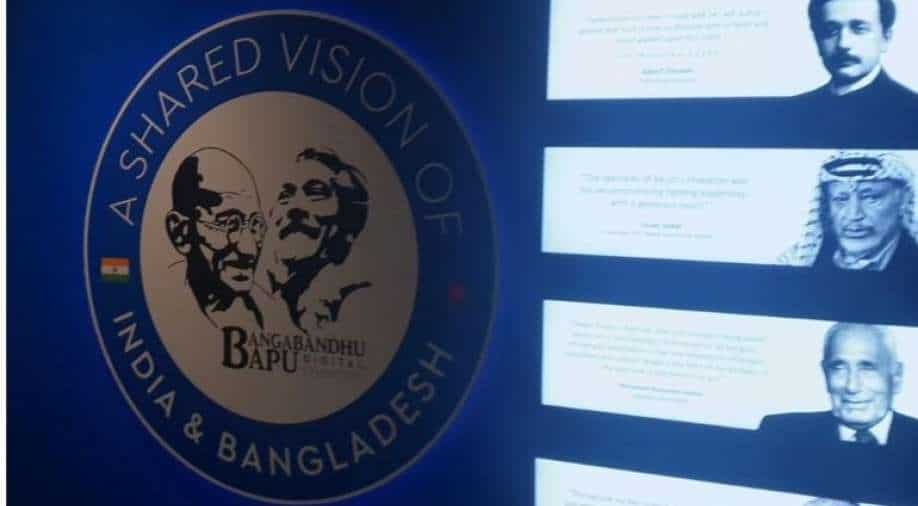 The Bangabandhu Bapu digital exhibition, jointly inaugurated by Indian Prime Minister Narendra Modi and Bangladesh PM Sheikh Hasina at December's virtual summit has opened in Delhi. The exhibition dedicated to the lives of India's father of the nation Mahatma Gandhi and Bangladesh's father of the nation Sheikh Mujibur Rahman is currently displayed at Delhi's Vigyan Bhawan.

It will be subsequently displayed in different locations in Bangladesh, the United Nations in New York and finally culminated in Kolkata in early 2022. The exhibition has 21 walls of information and over 100 points of digital engagement. Bangladesh High Commissioner to India Muhammad Imran and his officers visited the exhibition as well.

Key points of interest of the exhibition are a "meeting wall" that displays the only photo in the world that has both Bangabandhu and Bapu in one frame, a robotic signature of both the leaders, the favourite music of the leaders. Historical moments like Mahatma Gandhi's salt march, Sheikh Mujibur Rahman speech of March 7, 1971 is another noteworthy installation.

The pain and suffering endured by the Indians and Bangladeshi people during the brutal use of force by General Dyer in Jallianwala Bagh in 1919 and the genocide perpetrated by the Pakistani army in 1971 have been digitally shown. The "genocide tunnel" shows the depiction, the experiences of the many Bangladeshis who suffered in the hands of the Pakistani army in 1971 war of liberation.

The exhibition comes at a time when Bangladesh celebrates its 50 years of Independence. Indian PM Modi will be visiting Dhaka in March to be part of the Independence year celebrations. In fact, this year's republic day celebration will see a 122-member strong contingent from Bangladesh's Armed forces taking part in the grand parade. This is only the third time in India’s history that any foreign military contingent has been invited to participate. An Indian Air force's Dakota, which took part in the war, will do a flypast while Navy's tableau will be dedicated to 1971 war and how the war at sea was won.