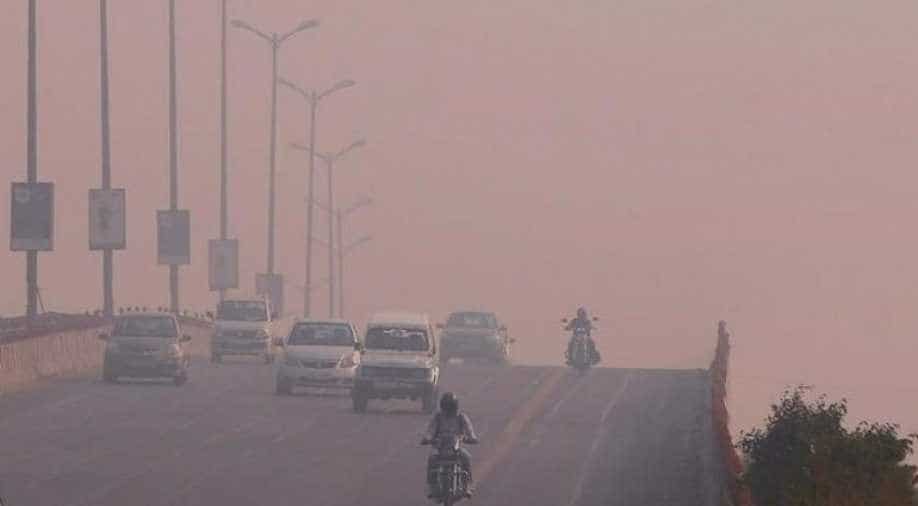 The pollution level in Delhi has been rising consistently due to recent stubble burning in and around Delhi. Photograph:( Zee News Network )

This is despite the extensive coverage of the capital's pollution crisis by local media, including numerous warnings from doctors about massive health hazards, especially for children, the sick and the elderly.

As pollution levels surged to "severe" and "hazardous" levels in New Delhi this week, there was little sign that residents of India's teeming capital were doing much to protect themselves.

The smog, which is expected to worsen in the next few days, exposed people to as much as 24 times the recommended limits for dangerous particles on Monday. But unlike in many Chinese cities, where face masks are a common sight when smog levels spike, it is still rare to see locals taking measures to reduce their exposure.

Toddlers stand at school bus stops in crisply ironed uniforms, while security guards, street sweepers, and rickshaw drivers spend many hours outside breathing in the filthy air - all without any attempt at protection.

Ask middle-class residents whether they have air purifiers in their homes and the answer is invariable no.

This is despite the extensive coverage of the capital's pollution crisis by local media, including numerous warnings from doctors about massive health hazards, especially for children, the sick and the elderly.

The apparent lack of concern about the toxic air - whether through ignorance, apathy or the blinding impact of poverty -gives federal and local politicians the cover they need for failing to vigorously address the problem, said pollution activists, social scientists and political experts.

Neither the governing party at the federal level nor the main opposition is in power in the capital, giving them little incentive to cooperate with the city authorities.

And while Delhi may have a population of more than 20 million, its importance at voting time - a national election is due by May next year - is insignificant in comparison with states such as neighbouring Uttar Pradesh, which has 220 million.

"The tragedy is that there is no political will at all either on the part of the federal government or the state government of Delhi and, as a result, we can see both blaming each other for the crisis that we are in," said Yogendra Yadav, a political polling expert. "Whatever little government action you get to see is because of the pressure that environmental activists and the Supreme Court get to exert."

India's problems with smog extend far beyond Delhi - the nation of 1.3 billion has 14 out of the 15 most polluted cities in the world, according to the World Health Organisation.

But in the capital, at least, this was the year the problem was supposed to be addressed.

After a cocktail of toxic fumes enveloped the area in October and November last year, the Delhi city government declared it a public health emergency and its Chief Minister Arvind Kejriwal described the Indian capital as a "gas chamber". Officials of the federal government said Prime Minister Narendra Modi's office had asked them to ensure that it did not happen again.

But steps taken so far have failed to make much difference, and now there is finger-pointing between Modi's administration, the Delhi city government, and the governments of states around the capital.

As this year's crisis has worsened, environment ministers from Punjab and Haryana - whose farmers' stubble-burning is a major contributor to the haze - failed to turn up for a meeting called by the federal environment ministry last week, sending their civil servants instead.

The farmers have been torching their fields as they get ready for new plantings, despite being offered government subsidies on machinery that would allow them to mulch the material into the ground without lighting fires.

Farmers say the subsidies were not enough to cover the price of the machinery, the cost of running it, and the additional labour needed, especially given higher fuel prices.

India had planned to reduce crop burning by up to 70 per cent this year but only a 30 per cent drop has been visible so far, according to a government statement last Thursday.

Blaming that as the main reason behind New Delhi's poisonous air, a spokesman for the city government said: "We can't take steps in isolation in Delhi; we can't build a wall."

The federal government, meanwhile, has attacked the city for doing little to control pollution from dust, vehicles and industries.

Certainly, there has been little done to reduce the number of heavily polluting vehicles on the roads in and around Delhi despite threats that have been made but not followed through, including one from the Supreme Court-appointed Environmental Pollution Control Authority (EPCA) to ban all private vehicles from the city.

And while the nation's top court has issued a ruling trying to restrict the use of fireworks on the night of the Hindu festival Diwali, which is on Wednesday, few expect it to be enforced. For one thing, the court's edict that only "green", less-polluting firecrackers can be let off between the hours of 8 p.m. and 10 p.m. is likely to be ignored because there are no "green" fireworks for sale in the city.

Most officials expect to wake up to even worse pollution on Nov. 8, as smoke from the festivities mixes with the smog from other sources to create a deadly cocktail. Light seasonal winds and a lack of rain at this time of year means pollution can linger for weeks, as it did last year.

But Modi's ruling Hindu nationalist Bharatiya Janata Party (BJP) is more concerned about the impact of weak farm incomes, high fuel prices, and whether job creation has been adequate as issues at the polls.

"A holistic approach in the current climate is difficult to envisage as political divisiveness means that politicians are not looking for enduring solutions," said Pavan K Varma, an official from a regional party in the state of Bihar and former diplomat who lives in Delhi.

Neither is it in the BJP's interests, or in the interest of the main opposition Congress party, to help Kejriwal's New Delhi government. In 2015, Kejriwal's anti-establishment Aam Aadmi (Common Man) Party, campaigning on an anti-corruption platform, crushed the BJP and Congress to take control of the city.

For Delhi's doctors, it is a nightmare.

This year, the number of patients with severe lung problems has already gone up by up by 25 per cent and is expected to increase further after Diwali, said Doctor Desh Deepak, a chest physician at government-run Ram Manohar Lohia Hospital.

"It's tragic that children are suffering and we'll destroy a whole generation if we don't take cognizance of the fact that pollution needs to be tackled on a war footing," said Dr Neeraj Jain, head of chest medicine at Sir Ganga Ram Hospital in Delhi.

Dipankar Gupta, a leading sociologist who has written books on Indian society, said only heavy state intervention was likely to solve the problem. He pointed to an improvement in the pollution levels in Beijing last year because of strict government measures to curb polluting industries near the Chinese capital.

But that state crackdown still seems a long way from happening in India.

The EPCA has announced a variety of steps between Nov. 1-10 as part of an emergency package, including the use of water sprinklers and a complete ban on construction.

But most environmental experts say it is far too little, too late, and is not addressing the biggest pollution sources.

Modi has not publicly addressed the health crisis that has engulfed the capital.

The grim prognosis means that foreign organizations, including embassies in Delhi, are finding it difficult to get top talent to come to the city.

"Staff with young children are increasingly choosing not to come which wasn't the case a few years ago," a Western diplomat told Reuters on condition of anonymity.

Most of the city's residents are poor, however, and more worried about making enough money to buy food than pollution.

"The daily grind ... leaves no room to think about the haze and smog," said Vimla Devi, who works as a maid in the suburbs of Delhi.