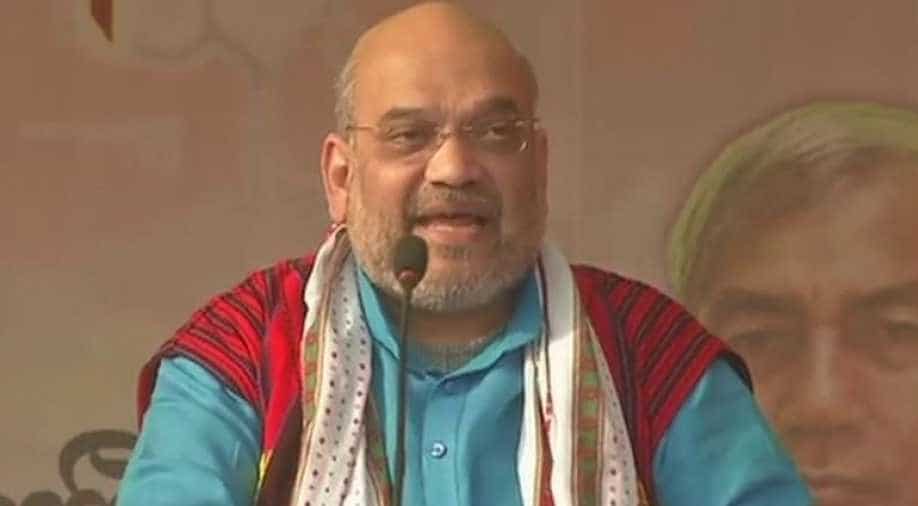 He also alleged that the Congress had not paid appropriate last respects to Rao, who died in 2004, when the party was in power at the Centre.

BJP president Amit Shah Sunday alleged that the Congress had "neglected" the "son of Telangana" and former prime minister PV Narasimha Rao after his death and sought the response of Rahul Gandhi, the chief of the opposition party, in the matter.

He also alleged that the Congress had not paid appropriate last respects to Rao, who died in 2004, when the party was in power at the Centre.

Addressing a public meeting here in Siddipet district ahead of the December 7 Telangana Assembly polls, Shah asked Gandhi to explain the "kind of treatment" meted out to Rao after his demise.

"Now Rahul Gandhiji is saying everyone should live with love. I want to ask him, when the son of Telangana and our former prime minister P V Narasimha Rao had died, (why) no 'salami' was given to his mortal remains and why were they sent to Hyderabad.

"I want to ask him (Gandhi), why such a treatment was meted out to the son of Telangana," he said.

The Bharatiya Janata Party (BJP) had accused the Congress in the past also of ignoring the legacy of Rao and humiliating him, which was denied by the opposition party.

During his speech, Shah listed out various welfare schemes launched by the Narendra Modi government in the last four-and-a-half years.

He said the Centre was working for various sections of the society, including the poor, farmers, women, Dalits and tribals.

Crores of toilets and houses were built for the people under the watch of the BJP government, Shah said.

"Our government provided LPG connections to poor women and also ensured electricity. These development works improved the standard of living of over 22 crore families," he added.

Improving the country's security was the biggest work of Prime Minister Modi, the BJP chief said.

"Under the previous UPA government, infiltrators from Pakistan used to enter India but no proper reply was given to them in those 10 years. However, after the Uri terror attack (in 2016), India under Modiji carried out surgical strikes in Pakistan and avenged the killing of our soldiers," he added.

Shah said the respect for India had increased manifold in the world under Modi.

Turning to the Telangana Rashtra Samithi (TRS) government in the southern state, he claimed that the ruling party had failed to implement several welfare programmes of the Centre, including its ambitious health insurance scheme, because it was "scared" that the prime minister might become more popular in Telangana.

Shah accused TRS chief and caretaker Chief Minister K Chandrasekhar Rao (KCR) of not extending any help to the farmers in the state, due to which, he said over 4,000 of them committed suicide in the last four-and-a-half years.

Shah said KCR had failed to fulfil the promises made to the people of Telangana, including the three-acre land parcel scheme for Dalits.

He appealed to the people to vote the saffron party to power in the upcoming polls as the Congress, the Telugu Desam Party (TDP) and the TRS had been elected earlier.

"Give one chance to Modiji and we will transform Telangana into a model state in five years," Shah said.

The 119-member Telangana Assembly will go to the polls on December 7 and the results will be announced on December 11.