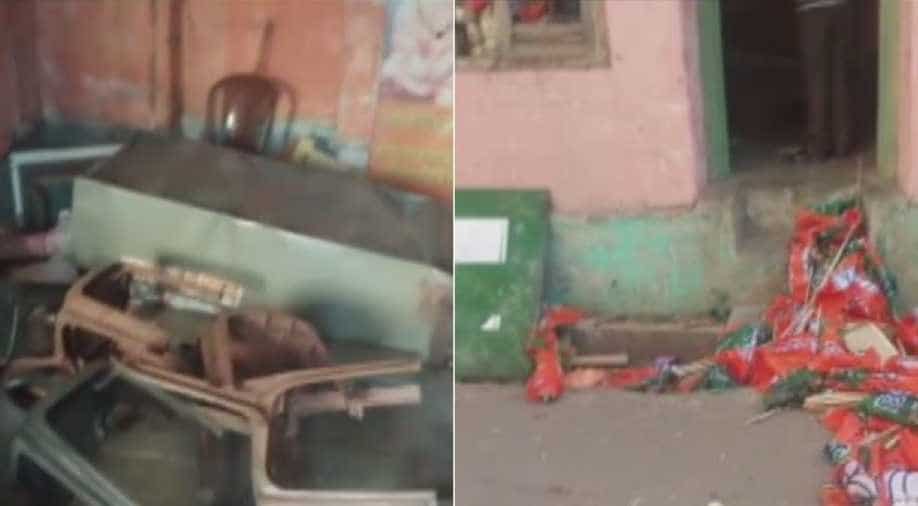 The BJP accused TMC supporters of vandalising its office in Bhawanipore, stating that 'law and order has completely collapsed!'

The BJP accused TMC supporters of vandalising its office in Bhawanipore, South Kolkata stating that "law and order has completely collapsed! No one is safe under TMC".

Home Minister Rajnath Singh Monday said there may be a constitutional breakdown in West Bengal in the wake of the Kolkata Police-CBI face-off and asserted that the Centre has the power to take action.

Law and order has completely collapsed! No one is safe under TMC. #MamataFreeBengal pic.twitter.com/v28er7Sb80

Amidst uproar in the Lok Sabha, he also termed as "unprecedented" the move to stop the probe agency from performing its duty.

In an unprecedented development, a number of CBI officers, who had gone to question Rajeev Kumar in connection with chit fund scam cases, were bundled into police jeeps, whisked to a police station and briefly detained on Sunday.

Hours after the incident, West Bengal chief minister Mamata Banerjee began a sit-in right in front of the Metro Cinema to protest "insults" she faced at the hands of Prime Minister Narendra Modi and BJP chief Amit Shah and claimed the CBI knocked on the doors of Kumar without a search warrant.

As the West Bengal CM continues with her dharna, she claimed that her 'Satyagraha' isn't against any agency but against "Modi-government's atrocities."

"I am ready to give my life but not compromise. I did not take to the streets when you touched TMC leaders. But I am angry when they tried to insult the chair of the Kolkata Police Commissioner, he is leading the organisation," Banerjee noted on Monday.

Meanwhile, West Bengal Governor KN Tripathi has submitted a report to Union Home Minister Rajnath Singh on the situation that unfolded in the city after a CBI team was allegedly obstructed by the police from questioning Kolkata Police chief Rajeev Kumar in the Saradha scam, Raj Bhavan sources said Monday.

The contents of the report were, however, not immediately known, news agency PTI reported.

As per an ANI report, the CBI has filed a contempt plea in the Supreme Court against West Bengal's Chief Secretary, Director General of Police and Kolkata Police Commissioner for wilful and deliberate violation of apex court's orders. More details on the development are awaited.