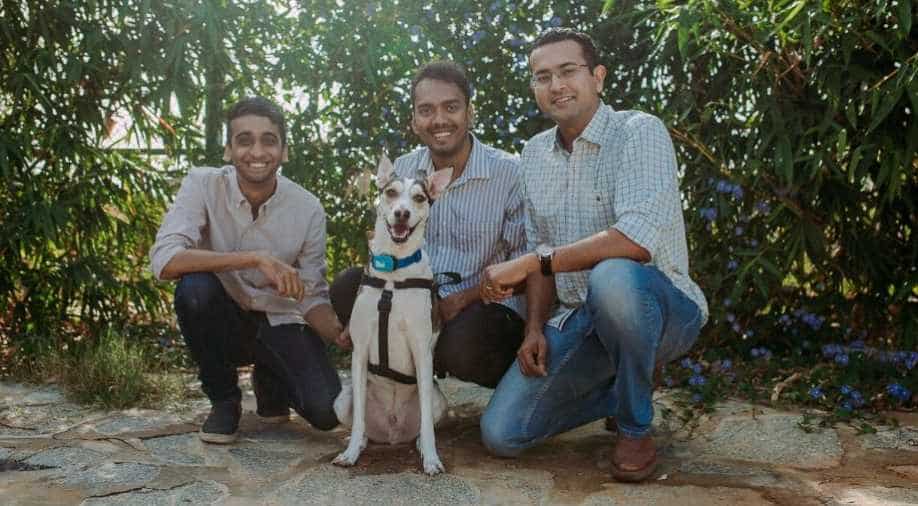 The device as small as 6cm x 4cm, Wagr can be attached to your dog's collar which will enable the pet owner to track its location and movements in real-time.

According to The American Humane Association estimates, 1 in 3 dogs in the US get lost at some point in their lives with many of them never returning home.

A few young entrepreneurs in the India's IT capital, Bengaluru, who are also dog lovers, felt that the problem was far worse in India but there were no statistics to prove it. Nonetheless, Advaith Mohan, Ajith Kochery and Siddharth Darbha decided to do something about the problem and developed 'Wagr.'

The device as small as 6cm x 4cm, Wagr can be attached to your dog's collar which will enable the pet owner to track its location and movements in real-time.

The device has an inbuilt GPS sensor and a SIM card that lets you define your pet's safe zone through an add on the mobile phone application.

"The device contains a GPS sensor as well as a pre-installed SIM card which allows you to essentially create safe zones on a companion app in areas where your dog is safe - like your house or office. The sensor and SIM card works in tandem to alert you if your dog ever exits the safe zone and allows you to track your dog real-time anywhere in the country. Wherever there is a cellular network in India, you will be able to track your dog. Even if you are outside the country, it allows you to track, " says Advaith Mohan, Co-founder of Wagr.

"It also has motion sensors which we have calibrated based on the breed of your dog that allows you to know how much exercise and rest your dog is getting every day,' Mohan added.

Currently close to 300 units of Wagr are being used by pet owners and the founders are working to improve the device and incorporate more features, making life slightly easier for pet parents.

They are now working on device's ability for advanced activity detection, that will help gauge the long-term and short-term health patterns of dogs.

Four key areas that will require detection is scratching, shivering, licking and eating, that can be indications of serious health conditions. More advanced activity detection can also lead to early diagnoses of diseases like hip dysplasia in dogs.

Jahnavi, a dog parent in the city of Bengaluru says that her anxiety about the well-being of her pet when she is not around, has certainly come down as she is now able to track her dog in real-time.

'The most important thing is when I am at work I generally tend to worry about how she is doing. I used to live alone, but then I moved to ensure I have flatmates so that someone can be around her all the time. But now I can see what she is doing. Though she is a house pet, she does tend to run outside when the door is open. If I am not around, it is hard to get her to come back. But now when she exits the safe zone I get a notification. So that is the biggest advantage that I have with it.' says Jahnavi.

"I am a dog parent and I have lost a dog before. The other co-founders are also dog lovers. Few years back we got to working on start-up ideas together and having lost a dog before the matter was close to our hearts, " Advaith said.

"When we got a new dog we realised that dog parents are facing more issues now. We also spoke to other dog lovers and realised that taking care of the safety and health of the dog is of utmost importance. To give you a statistic, in the US 1 in 3 dogs get lost and very few actually return home. On the health side, obesity is one of the leading health threats to dogs. Over 2-3 years of a dog's lifespan is reduced due to obesity. These were the primary problems we were attempting to tackle and Wagr was the obvious solution," Advaith added.