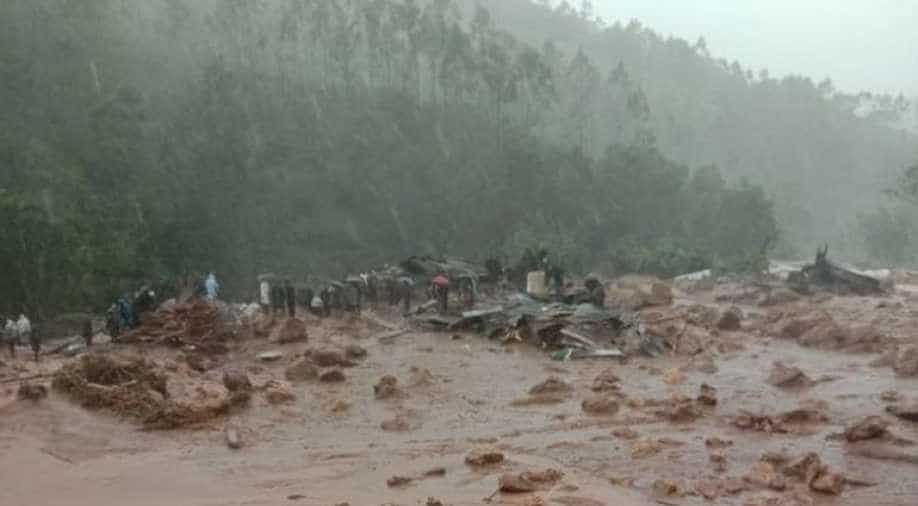 The state government said teams of National Disaster Response Force personnel have been deployed for the rescue operations and also sought an Indian Air Force helicopter.

At least 14 people were killed and over 50 others feared trapped in debris after a landslide triggered by heavy rains flattened a row of dwelling units of tea estate workers at Pettimudi in this high-range district in Kerala early Friday, police and officials said.

The incident is said tohave occurred in the wee hours when a huge mound of earth fell on the "row houses" and two children and five women were among the deceased, most of whom were plantation workers from neighbouring Tamil Nadu.

Twelve people have been rescued and efforts were underway amid continuing rains to locate at least 52 others missing in the first major rain-related mishap since the onset of South West monsoon last month that brought back memories of havoc caused by floods in the previous two years in the state.

The state government said teams of National Disaster Response Force personnel have been deployed for the rescue operations and also sought an Indian Air Force helicopter.

Footage carried by local television showed rescuers carrying bodies away from the site of the landslide in a mountainous area of Idukki district.

Prime Minister Narendra Modi on Friday expressed anguish at the loss of lives in a landslide in Kerala's Idukki district following heavy rains.

Annual monsoon season is vital for India as half of its cropland lacks irrigation. The rains support two-thirds of India's 1.25 billion population who live in rural areas and rely on farming. But excessive rains cause many problems such as floods, landslides and water borne diseases.