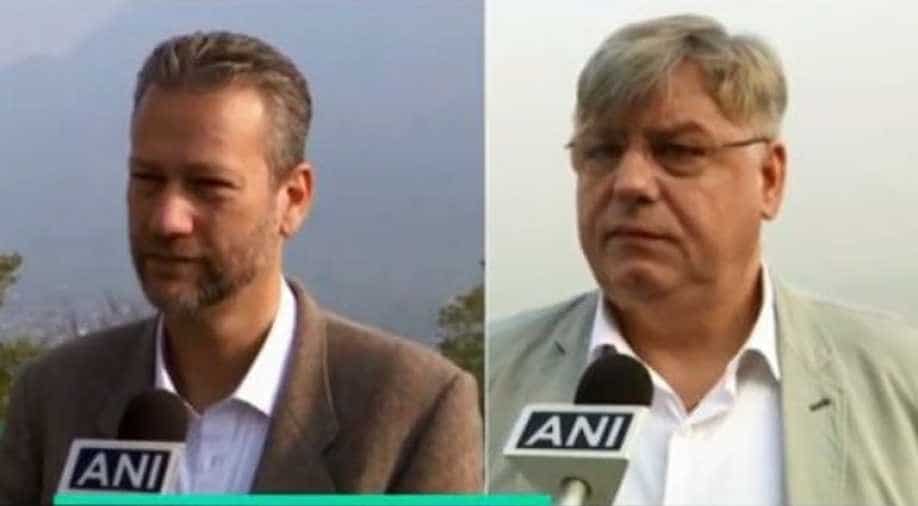 The delegation, comprising European parliamentarians interacted with locals in Kashmir valley to get a first-hand understanding of the situation.

A delegation of 23 European lawmakers visited Jammu and Kashmir to assess the situation in the valley after the abrogation of Section 370.

The European Union parliamentary delegation, comprising parliamentarians from the United Kingdom, Poland, France, and other countries interacted with locals in Kashmir valley to get a first-hand understanding of the situation.

It is the first foreign delegation that has been allowed to visit Kashmir after the scrapping of article 370 which accorded special status to the state. Earlier, the citizens of J&K had special rights about ownership of property, fundamental rights, and relating to citizenship.

Henri Malosse, a parliamentarian from Poland expressed shock at seeing news which referred to the delegation as racists, fascists, and Islamophobic. ''We were in Bangladesh earlier. We are thankful to the Indian government for this [visit]. This will help us better understand things. This is a fight against terrorists. We have heard that five innocent workers were killed. We are pleased to meet activists who spoke about the future and peace'', Malosse said. He also referred to the abrogation of Article 370 as India's "internal matter''.

Theirry Mariani from France simply wanted a firsthand account of what's happening in Kashmir, while suggesting that terrorism is capable of destroying a country. ''I was in Afghanistan and Syria. I don’t want Kashmir to become another Afghanistan. The situation isn’t finishing in the Middle East. New places for terrorists can become Kashmir... we want development. We aren’t here to interfere with politics'', Mariani said.

While referring to the shooting of five workers in the valley, Bill Newton Dunn from the United Kingdom said that ''it’s a terrible thing''.

''Since 1945, we [European Union] have been living in peace together. India is a peaceful country. We want to know how we can help and support people. We had a meeting with the teachers and civil society. Someone talked about the corruption in the system. We are here for facts'', Dunn added.

Ryszard Czarnecki from Poland perceives terrorism in Kashmir as a global issue. ''Terrorism in Kashmir is not the problem of India alone; I see it as our problem, the international community. We support India for finding the best solution to the problem. We are here to understand your problem. In our opinion, this is important for our national relations. We can inform our parliament about this'', he added.

Malosse added that the fact that India has a free press is a good sign, all the while being ''very impressed by the beauty and the engagement with the people [whom they] met''.

Along the same lines, Mariani from France called the visit an ''excellent experience'', which helped them understand the ground situation better.  ''We believe in transparency. I felt bad [when people called] us Nazi lovers. We came from our respective countries... [and] can never be citizens of Kashmir.'' Mariana further added that terrorism is a common problem for the world.

The media reportage of events in Jammu and Kashmir has been a hot topic ever since Article 370 was scrapped. Dunn called it a ''world problem''. ''It is a long-term problem also caused by social media. Journalists have a big responsibility. Our media is not so good at facts'', Dunn added.

When asked about the state of minorities in Pakistan, Mariani told WION that he's worried about the treatment accorded to Christians in the neighbouring country. ''Freedom of religion is important [so that] everyone can practice [their] religion'', he said.

Travel advisories across Europe had recently warned people against visiting Jammu & Kashmir. While talking about this, Mariani said to WION, ''We can say to the people that this is a good place. They have good art and handicraft. The fight against terrorists is a condition for the population.''

Czarnecki extended support to India's fight against terrorism and said, ''We should help to find a solution to these fights. We should make efforts and support India''.

''We believe in peace and talking'', said Bill Newton Dunn. While advocating peace, he referred to the problem in Northern Island where Christians were fighting with each other. ''Now it is peaceful [there]. My advice will be to find peace'', he said.

Dunn further asserted that he would inform the parliament of what they have seen and learned from this visit. ''I think this mission could be useful. I think I will go back to the liberal group and explain what I have learned and that way we will inform the parliament'', he said.