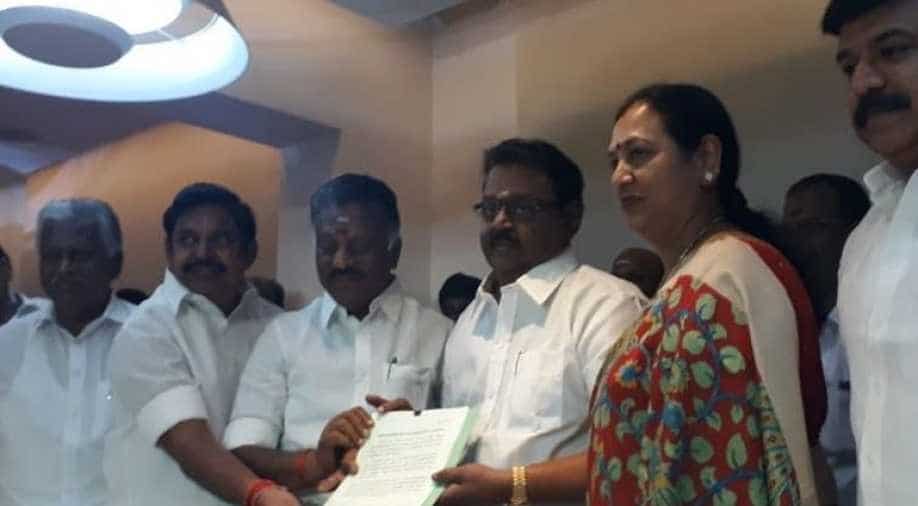 An agreement was signed between the top leadership of the two parties -- Tamil Nadu Chief Minister K Palaniswami and his deputy O Panneerselvam and Vijayakanth and DMDK Treasurer and his wife Premalatha in Chennai.

Ending days of suspense and hard bargain, the ruling AIADMK Sunday inked an electoral pact with DMDK led by actor-turned-politician Vijayakanth, allotting it four of the 39 Lok Sabha seats in Tamil Nadu.

An agreement was signed between the top leadership of the two parties -- Tamil Nadu Chief Minister K Palaniswami and his deputy O Panneerselvam and Vijayakanth and DMDK Treasurer and his wife Premalatha in Chennai.

Incidentally, the announcement came shortly after the Election Commission announced the Lok Sabha poll schedule. Tamil Nadu is going to polls on April 18.

The AIADMK-led alliance already has the BJP, PMK, Puthiya Tamizhagam and AINRC as its members.

"It has been decided to allot 4 seats to DMDK. In the bypolls to 21 Assembly constituencies, the DMDK will support the AIADMK," Panneerselvam said.

Describing his party led front as "a mega and victory alliance", he said the constituencies to be contested by the allies will be announced after consultations.

The finalisation of the alliance with DMDK brings the curtains down on days of uncertainty amid reports that the party was seeking higher share of seats.

Several rounds of talks were held between the leaders of the two parties and even senior BJP leader and Union Minister Piyush Goyal, election in-charge of the party, had met Vijaykanth at his home.

The DMDK was expected to be part of the alliance in time for the March 6 election rally addressed by Prime Minister Narendra Modi near here.

However, it did not materialise though leaders of the two parties had indicated that by the next meeting to be addressed by Modi in the state, the alliance would be firmed up.

At one stage, the DMK too was said to have been keen on a tie-up with the DMDK, but earlier last week it announced the conclusion of its alliance, shutting doors on any more partners.

The DMK has entered into alliance with Congress, VCK, IUML, MDMK and CPI-M and CPI.

By signing the pact with the DMDK, the AIADMK has almost come to the penultimate stage of finalising the alliance led by it in Tamil Nadu.

Already, the party has finalised seat sharing with BJP and PMK and a few smaller outfits for the Lok Sabha elections in Tamil Nadu and Puducherry, alloting 18 of the 40 seats at stake.

It has alloted seven seats to PMK, five to the BJP and one to Dalit-based Puthiya Tamizhagam in the state and the lone Puducherry seat to AINRC.

The alliance parties have also agreed to extend support to the AIADMK for the byelections.

There are expectations that former Minister GK Vasan led Tamil Maanila Congress may join the AIADMK front, giving the final shape to the combine that will take on the DMK-led alliance.

Asked if there was a scope for Tamil Maanila Congress joining the AIADMK front, Paneerselvam said "a good decision" will be out in a day or two.

"It is a robust coalition," he said adding interview of candidates seeking party tickets will commence from tomorrow at AIADMK headquarters.

The AIADMK which for the first time joined hands with DMDK in 2011 is again tying up with that party after a long hiatus.

Premalatha pledged her party's support to the AIADMK in the bypolls to 18 assembly seats, to be held along with the Lok Sabha polls, and local body elections, expected in May.

Asked if she was satisfied with the number of seats offered to her party, the DMDK leader said "Yes, there is nothing in numbers, it all boils down to your thought process."

She was apparently indicating that AIADMK and DMDK were together in their line of thought.

"It is a victory alliance and an example is 2011 Assembly election when the AIADMK-DMDK alliance had a big win," Premalatha said.

She hit out at the DMK and hailed the AIADMK as a party nurtured by a woman leader late Jayalalithaa. The DMDK and AIADMK were natural allies, she added.