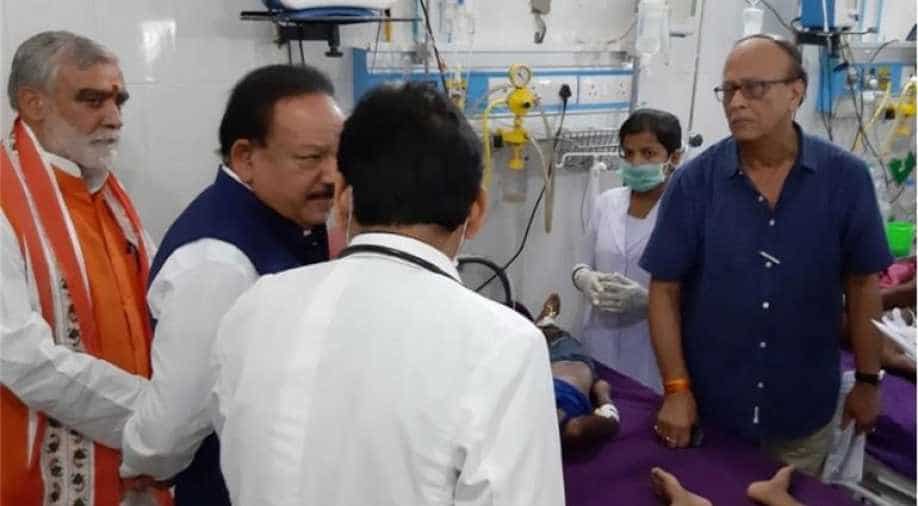 As many as 112 children have died of AES in Bihar's Muzaffarpur district including 93 children at Sri Krishna Medical College and Hospital (SKMCH) and 19 others at Kejriwal Hospital.

Even as hospitals in Muzaffarpur grapple to deal with the outbreak of Acute Encephalitis Syndrome (AES), leaders from various political parties along with officials among others have been trooping in to take stock of the situation, which authorities say is hampering their work.

"Political leaders visiting hospitals is causing a disturbance in work. I urge the political parties to go to villages and try to raise awareness instead. There is no need of them in hospitals," said Sri Krishna Medical College and Hospital (SKMCH) Superintendent Sunil Kumar Shahi.

As many as 112 children have died of AES in Bihar's Muzaffarpur district including 93 children at Sri Krishna Medical College and Hospital (SKMCH) and 19 others at Kejriwal Hospital.

"Till now, 372 children have been admitted here, of which 118 have been discharged and 57 will be discharged soon. It is unfortunate that we have lost 93 lives due to AES here," Shahi said.

Meanwhile, relatives of patients, mostly children, admitted to the SKMCH complained about frequent power cuts and a shortage of beds.

"There are frequent power cuts. It gets very hot in here. Children start crying. There are no other arrangements," said the mother of a child who is being treated in the hospital.

"There is a shortage of beds. We are treating two to three patients on one bed. The shortage will be resolved when more patients are discharged," the superintendent said.