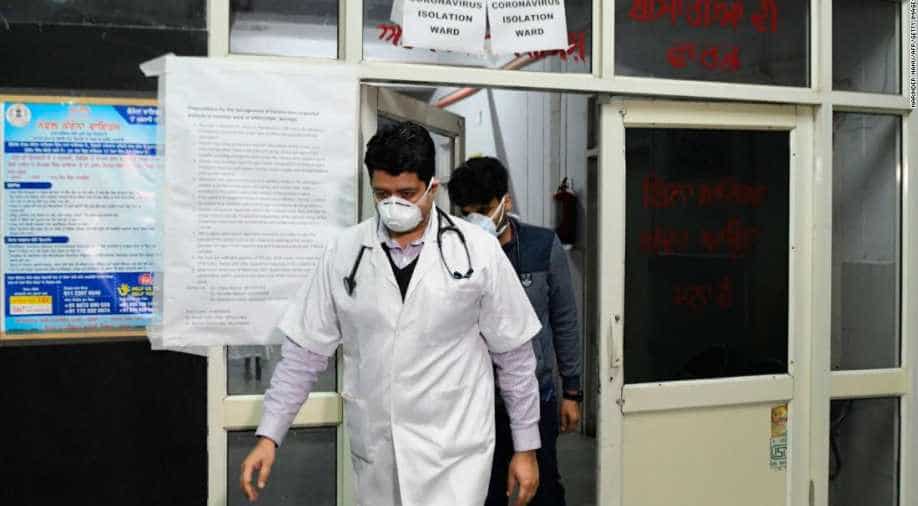 The Health Ministry said around 1,800 people in Delhi connected with the Tablighi Jamaat congregation have been shifted to nine quarantine centres and hospitals.

With 376 new cases of COVID-19 reported in the country in the last 24 hours, the Health Ministry on Wednesday said the spike does not represent a "national trend" and was primarily due to travel by those who had attended the Tablighi Jamaat congregation in the national capital.

The Health Ministry in a statement said 1,637 confirmed cases and 38 deaths have been reported in the country as of now.

"During the last 24 hours, 376 new confirmed cases and three new deaths have been reported. 132 persons have been cured /discharged from the hospitals after recovery," the statement said.

However, addressing the daily press briefing to provide updates on the COVID-19 situation in the country, Joint Secretary in the Health Ministry Lav Agarwal said 386 new positive cases were reported in the last 24 hours and till now there are a total of 1,637 COVID-19 cases in the country.

"I want to highlight that the rise in the number of positive cases does not represent a national trend, but if there will be a failure anywhere, obviously cases will rise," he said as he urged people to follow the guidelines of social distancing and lockdown and avoid congregations and religious gatherings.

He said 154 new positive cases of the disease have been reported due to the transit-related history of those who attended the Tablighi Jamaat congregation.

These include 23 new cases from Jammu and Kashmir, 20 from Telangana, 18 from Delhi, 65 from Tamil Nadu, 17 from Andhra Pradesh, nine from Andaman and Nicobar Islands and two from Puducherry.

All the states concerned have been notified and asked to carry out intensive drives of rigorous contact tracing and testing besides sending those with symptoms to quarantine or isolation facilities or hospitals, Agarwal said.

He said around 1,800 people in Delhi connected with the Tablighi Jamaat congregation have been shifted to nine quarantine centres and hospitals.

Giving details about the necessary arrangements being made by the government to tackle the coronavirus pandemic, Agarwal informed reporters that the Indian railways is preparing to set up 3.2 lakh isolation and quarantine beds by modifying 20,000 train coaches.

Modification of 5,000 coaches for the purpose has already begun, he said.

'Lifeline' flights have also been launched by the Civil Aviation ministry to transport testing kits, medicines, masks and other essentials commodities, Agarwal said, adding that 15.4 tonnes of medical supplies have been transported by these flights in the last five days.

Speaking at the same press conference, Raman R Gangakhedkar, the Head of Epidemiology and Communicable Diseases at the Indian Council of Medical Research (ICMR) said 47,951 tests for COVID-19 have been conducted in the country till date.

There are 126 labs in the ICMR network. "The testing capacity utilisation is about 38 cent as of now," he said.

Besides, 51 private labs have been given the approval to conduct tests for coronavirus infection and 861 people were tested at these facilities on Monday.

Agarwal said that under the orders of the Supreme Court, states have been directed that trained counsellors and/or community group leaders of all religions will visit and provide psychological social support to the migrant workers in relief camps.

As directed by the apex court, for technical queries the Ministry of Health has created an email (technical query. covid19@gov.in) which will provide authentic technical information to queries from institutions like AIIMS, New Delhi and a joint secretary rank officer from the ministry, he said.

In addition, the National Pharmaceutical Pricing Authority (NPPA) has notified that all 24 classes of medical devices shall be regulated as drugs for quality control and price monitoring under the provisions of Drug (Price Control) Order, 2013 with effect from April 1 to ensure that no manufacturer shall increase the MRP of these items more than beyond 10 per cent of MRP in the last 12 months, he said.