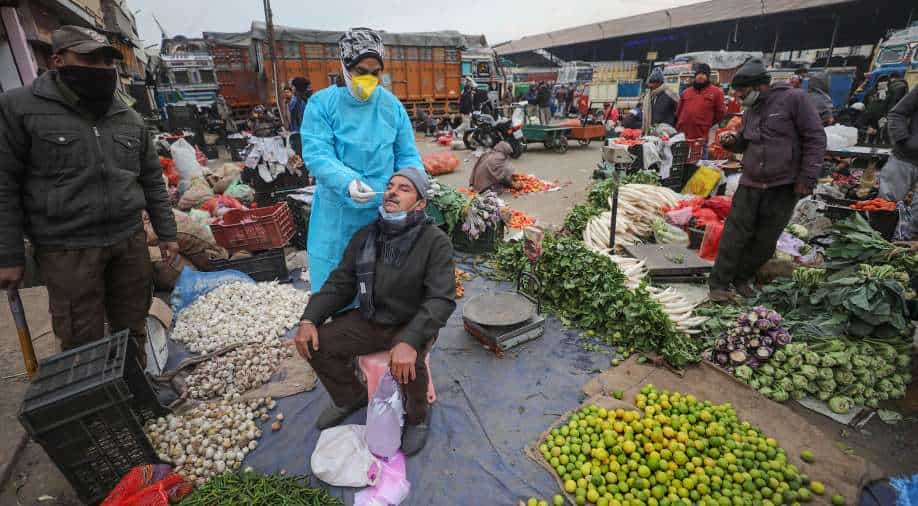 A health worker collects swab sample from a vendor in a market in Jammu Photograph:( PTI )

The Odisha government in eastern India has imposed restrictions on Christmas and New Year celebrations.

Amid the rise in Omicron cases in the country, India's Uttar Pradesh state imposed night curfew on Christmas.

The night curfew in India's northern state will be imposed from December 25 from 11pm to 5am, authorities said.

India's health ministry informed that there are 358 Omicron cases reported so far in the country as Union health secretary Rajesh Bhushan asserted that the country cannot let its guard down with the world witnessing the fourth wave of the virus.

The health secretary said that the top five states with the highest number of active COVID-19 cases were Kerala, Maharashtra, Tamil Nadu, West Bengal and Karnataka.

Bhushan added that Omicron variant cases has been doubling every 1.5 to 3 days and has been "spreading fast". The health secretary informed that Omicron cases have now spread to 17 states in the country.

The Union health secretary said the health ministry has advised states to impose night curfew and to regulate large gatherings including taking steps to increase bed capacity in hospitals amid a rise in Omicron cases.

After the Uttar Pradesh government imposed night curfew, the Odisha government in eastern India imposed restrictions on Christmas and New Year celebrations. The local government has disallowed celebrations in hotels and restaurants until January 2 including a ban on social gathering.

Reports say the Gujarat government has also decided to impose night curfew in Ahmedabad, Gandhinagar, Rajkot and other towns.