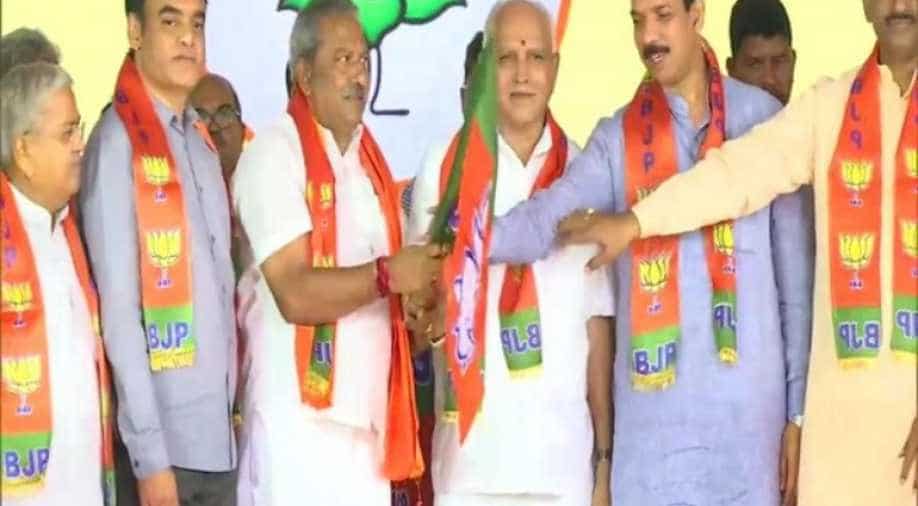 Out of the 17 disqualified MLAs, MTB Nagaraj is already a member of the BJP, while Roshan Baig has been left out.

A day after Supreme Court's Karnataka verdict,15 out of 17 disqualified rebel MLAs, including those from Congress and JD(S) joined the Bharatiya Janata Party on Thursday in the presence of Chief Minister BS Yediyurappa here.

Out of the 17 disqualified MLAs, MTB Nagaraj is already a member of the BJP, while Roshan Baig has been left out. The top court has allowed 17 disqualified rebel MLAs to contest in the upcoming bypolls which are slated to be held on December 5.

Baig did not attend the joining program held at the party office here. According to sources, he was not allowed to take membership of BJP due to the IMA Ponzi scam and allegations against him in RSS worker Rudresh's murder case.

"We didn't come out of the coalition government just to save the state from evil politics. We came out of Congress and JD(S) and joined BJP, it's not anti-defection, it's political polarisation. We will stand with BJP leaders and we will work along with them as they have given us a chance to work along with them. I thank you all including Prime Minister, Home Minister and BJP working president JP Nadda," said H Vishwanath, one of the 17 disqualified MLAs.

The Supreme Court had on Wednesday upheld the decision of the then Karnataka speaker KR Ramesh Kumar to disqualify 17 rebel Congress-JD(S) MLAs under the anti-defection law but said that they can contest the upcoming by-elections in the state.

The rebel legislators were disqualified by the then speaker KR Ramesh Kumar in July earlier this year under the anti-defection law after they tendered their resignation. They were also barred from contesting polls for the duration of the current assembly, which is slated to end in 2023. The move led to the collapse of the Congress-JD(S) coalition government, paving way for BJP to stake claim to form a new government in the state.

The disgruntled MLAs then moved the apex court challenging their disqualification. They sought quashing of the order passed by the Speaker and prohibition imposed on them to contest elections. The matter was reserved by the court on October 25. The elections for 15 out of 17 seats are slated to be held on December 5.