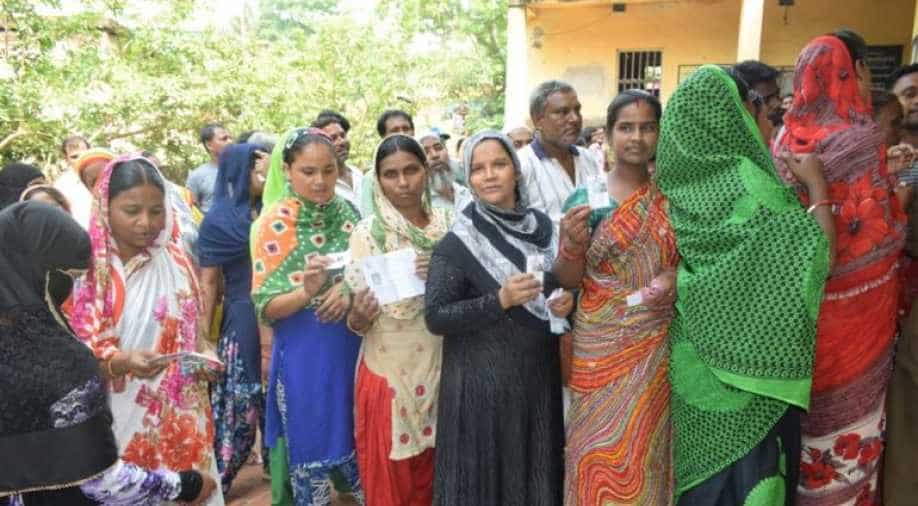 Howrah, West Bengal: Women queue up at a polling station to cast their votes for the fifth phase of 2019 Lok Sabha elections, in West Bengal''s Howrah, on May 6, 2019. Photograph:( IANS )

An electorate of 1,49,63,064 will decide the fate of 111 candidates in these nine seats -- Kolkata North and Kolkata South, Dum Dum, Barasat, Basirhat, Jadavpur, Diamond Harbour, Jaynagar (SC) and Mathurapur (SC).

Preparations are in place for the seventh and final phase of the general elections in West Bengal, where nine Lok Sabha constituencies will go to polls on Sunday.

An electorate of 1,49,63,064 will decide the fate of 111 candidates in these nine seats -- Kolkata North and Kolkata South, Dum Dum, Barasat, Basirhat, Jadavpur, Diamond Harbour, Jaynagar (SC) and Mathurapur (SC).

Eight seats, barring Jadavpur, will witness a four- cornered contest between the Trinamool Congress, the BJP, the Congress and the Left Front.

The Congress has given the Jadavpur seat a miss.

Sitting MP Abhishek Banerjee, who is the nephew of TMC supremo Mamata Banerjee and considered the number two in the party, is seeking re-election from the Diamond Harbour seat, where he is pitted against BJP's Nilanjan Roy.

The CPI(M) has nominated Fuad Halim and the Congress Soumya Aich Roy for the seat.

In the Jadavpur seat, TMC's celebrity candidate Mimi Chakraborty will contest against Anupam Hazra of the BJP.

In the Jaynagar (SC) seat, TMC's Pratima Mondal will contest against Ashok Kandary of the BJP. The Congress has fielded Tapan Mondal and Left Front constituent RSP, Subhas Naskar.

Choudhury Mohan Jatua is the TMC candidate from the Mathurapur (SC) constituency against BJP's Shyama Prasad Halder. The Congress has named Krittibas Sardar and the CPI(M) fielded Sarat Chandra Haldar for the seat.

Kolkata South will witness Mala Roy of the TMC battling it out against BJP's Chandra Kumar Bose. The CPI(M) has nominated Nandini Mukherjee and the Congress Mita Chakraborty.

In Kolkata North, Sudip Bandyopadhyay will contest against Rahul Sinha, the BJP national secretary. The CPI(M) has fielded Kaninika Bose and the Congress, Syed Shahid Imam.

A total of 710 companies of central forces are being deployed by the Election Commission to cover 17,042 polling booths to ensure free and fair voting, officials said.

The nine constituencies are spread across the three districts of Kolkata, South and North 24 Parganas.

The prime minister held four poll meetings on the last two days of the campaign, while Banerjee took part in several road shows at different places in the metropolis in the run-up to this phase.

Shah's roadshow in the city on Tuesday was marred by violence and destruction of social reformer Ishwar Chandra Vidyasagar's bust in a college in north Kolkata.

In a first such action in India's electoral history, the Election Commission ordered campaigning in the nine West Bengal constituencies to end at 10 pm on Thursday, instead of 6 pm on Friday, in the wake of the violence between the BJP and the TMC during Shah's roadshow.

Besides general election observers and expenditure observers, the poll panel has for the first time deployed a special police observer and a special observer.

VVPAT will be also be used in all the polling booths along with the EVMs, EC officials said