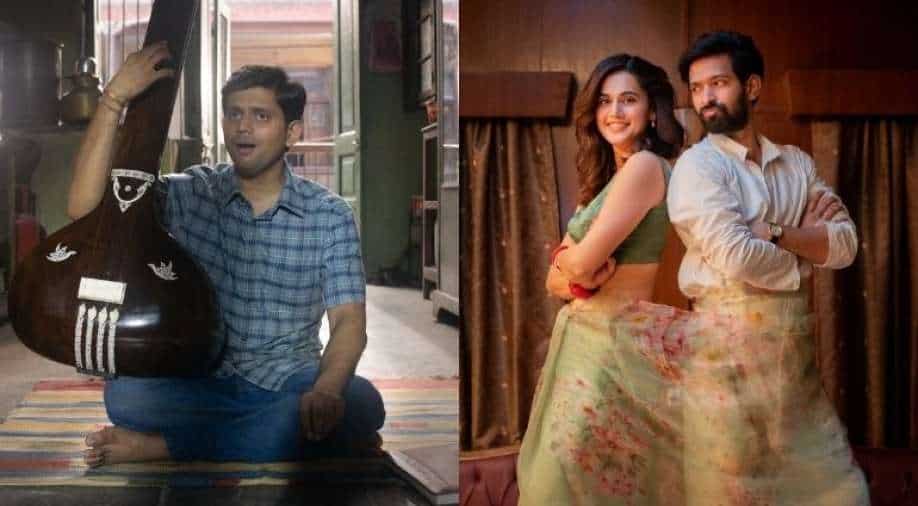 Stills from 'The Disciple' and 'Haseen Dilruba' Photograph:( Twitter )

As many as 13 new films are slated to release on the OTT platform in the coming months.

Chaitanya Tamhane's critically acclaimed and award-winning film 'The Disciple' is among the list of 13 films that Netflix India's 2021 slate. The 13 films were announced at a virtual press conference on Wednesday.

The films will join new and returning series, documentaries, and comedy specials that the streamer announced in what is being seen as its biggest line-up.
Taapsee Pannu-Vikrant Massey-starrer 'Haseen Dillruba' and Kartik Aaryan's 'Dhamaka' are among the 13 feature-length titles that Netflix announced on Wednesday under its 'See What's Next India' slate for the year 2021.

'The Disciple', produced by Vivek Gomber of 'Sir' fame, is Tamhane's second feature film. He had won critical acclaim for his debut feature 'Court' a few years back. The movie, which focuses on a classical musician in Mumbai, has Oscar-winner Alfonso Cuaron onboard as an executive producer.

The Marathi feature was also the only film in two decades from India to be selected for a European film gala's main competition at the 2020 Venice International Film Festival where it won the best screenplay award.

Talking about the role of streamers in redefining the film watching experience, Gomber said the exposure to diverse genres and languages has led the audience to accept different stories.

"Today the audience is used to watching all kinds of cinema, French, German, Spanish, which helps the filmmakers as you're not limited by the language you choose to tell your film your film in. It's liberating to have that kind of diversity and support. When we made 'Court', we were lucky to get a theatrical. It takes a lot to get your film there," the actor-producer said in a virtual press conference.

Gomber, whose 'Sir' released on the streamer after a theatrical release, said the film found "so much love" on Netflix.

Ivan Ayr's 'Milestone' is another festival favourite title that the streamer has acquired. The film was also a part of the Venice International Film Festival where it screened in the Orizzonti segment.

The poignant film follows the story of a recently bereaved, middle-aged truck driver, Ghalib, who is coping with a personal tragedy and the consequences thereafter, while facing the existential threat of losing his job to a young recruit.

'Haseen Dillruba', directed by Vinil Mathew and written by Kanika Dhillon, is about a woman whose heart longs to live like words captured in a novel. She soon finds herself entangled in the murder of her own husband.

In the already announced 'Dhamaka', Kartik Aaryan plays a frustrated former news anchor, who is given another chance on prime-time TV when a terrorist calls him with a bomb threat. It is produced by RSVP, Ram Madhvani Films, Ronnie Screwvala, Ram Madhvani, Amita Madhvani. 'Aarya' helmer Ram Madhvani directs the thriller.

Johar said, as a filmmaker, he is trying not to "box" content and is more instinctive about deciding which story will be best suited for theatres or streamers.
"There are so many kind of genres that are circulating within our development team. It's about what instinctively talks to you. There are certain films that immediately tell me this should be a theatrical experience and some others where you feel they'll prove with time...

"You want a film to keep brewing, which happens on a platform where you can watch a film two months or a year down the line... The two films we are coming out immediately with, one is an anthology and the other one is a pure, vintage love story," he said.

'Bulbul Tarang' by Reliance Entertainment, features Sonakshi Sinha and Tahir Raj Bhasin in lead roles. Directed by Shree Narayan Singh, the Kannauj-set film revolves around a chirpy young girl called Bulbul who wants her groom to ride a horse in their marriage procession but there is resistance in their traditional village.

Dhanush-starrer 'Jagame Thandhiram', which was already announced, is also part of the line-up. Directed by Karthik Subbaraj, the film follows Suruli, a nomadic gangster who has to choose between good and evil in a war for what one can truly call home.

Amala Paul, who starred in the recently released Telugu anthology 'Pitta Kathalu', said the streamer provides "lot of freedom" for actors and filmmakers.
Mani Ratnam-produced anthology film 'Navarasa', which brings together nine directors to explore nine emotions, is also on the list.

'Meenakshi Sundareshwar', produced by Dharmatic, is about the long-distance relationship of a newlywed couple, played by Abhimanyu Dassani and Sanya Malhotra.

Malhotra headlines another title, 'Pagglait' on the streamer. In the coming-of-age story, she plays a recently widowed woman, who is struggling to mourn her husband's death.

'Jaadugar', featuring Jitendra Kumar and Arushi Sharma, is a small-town story of a magician who wants to win the local football match to win the heart of the woman he likes. It is directed by Sameer Saxena.