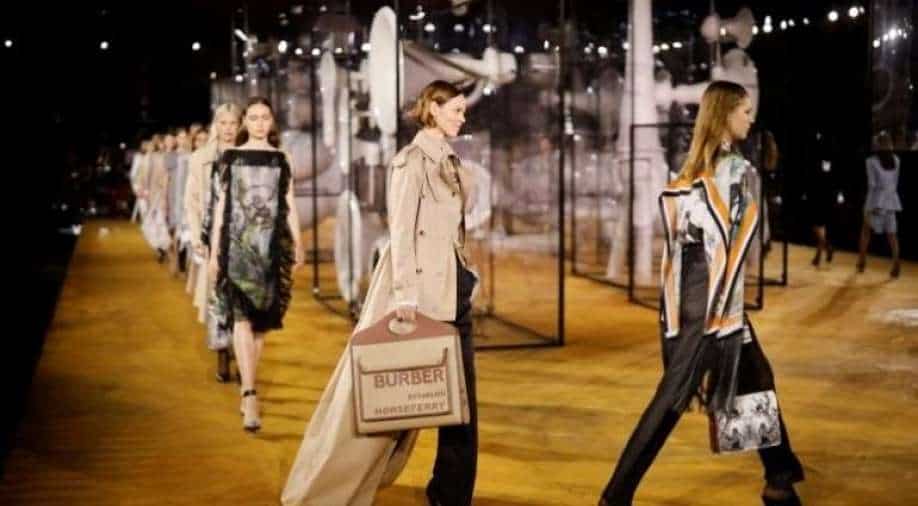 Young British designers then came under the spotlight, with Saul Nash showcasing a relaxed but luxurious streetwear collection of merino wool tracksuits, hoodies, puffer coats and scarves, many emblazoned with his Saul logo.

Fashionistas braved gale-force winds in London on Friday to attend the first Fashion Week shows, with a schedule dominated by up-and-coming young designers.

Gusts ripped through the streets of the British capital as crowds, wrapped up in coats and hats, flocked to the week's first live shows with attendees, which make up about half of the five-day event's timetable.

It kicked off with the sustainable label SOHUMAN, created by Spaniard Javier Aparici, who promises "radical transparency" on the factories used to make his garments.

He showed an ultra-feminine collection of cocktail dresses in red and black featuring applique flowers, sheer panels and giant bows.

Young British designers then came under the spotlight, with Saul Nash showcasing a relaxed but luxurious streetwear collection of merino wool tracksuits, hoodies, puffer coats and scarves, many emblazoned with his Saul logo.

With a background in dance and performance, Nash graduated from the Royal College of Art in menswear in 2018.

Another British brand, Poster Girl, known for ultra-revealing cutaway shapewear-style dresses worn by celebrities such as Kylie Jenner and Dua Lipa, held its first catwalk show with an apres-ski theme.

Poster Girl designers Francesca Capper and Natasha Somerville, who studied at the prestigious Central Saint Martins fashion college, showed their neon-hued creations in a freezing building due for demolition.

Models in tube dresses and leggings wrapped up in fake fur coats and puffer jackets. There was even a ski suit, accessorised with bright pink high heeled sandals. Fans took pictures on their phones and whistled in approval.

Missing from this week's events are several of the best-known brands in British fashion, including Burberry, Mulberry and Victoria Beckham.

Burberry has announced that it will hold a separate live show in London in March, while Beckham has not participated in London Fashion Week, even digitally, for a year. She has complained of the high cost of catwalk shows.

Another major name in British fashion, Ozwald Boateng, announced at the last minute that he will hold a comeback show on Monday.

The former creative director for Givenchy menswear, who was the first black head designer at a luxury fashion house, has not shown a collection in London for 12 years.

Williams' materials include abandoned festival tents for garments and book waste for bags while Malone's creations feature fragments of materials including scrap leather.

Following in the footsteps of designer brands such as Gucci and Dolce & Gabbana, meanwhile, Serbian designer Roksanda Ilincic has announced she will sell non-fungible tokens (NFTs), offering digital ownership of a 3D image of a dress from her label.

The event, which showcases autumn/winter 2022 collections, was held entirely virtually a year ago as it coincided with a national lockdown. Live catwalk shows resumed last September.

This time there are nearly 40 such shows including Simone Rocha, Molly Goddard, Roksanda, Erdem and Rejina Pyo. Other designers are sticking to digital formats, such as punk icon Westwood, who will present her latest creations in a video.

After being hit hard by the pandemic, the British fashion sector, which employed about 890,000 people in 2019, is seeking a route to recovery.

Caroline Rush, the chief executive of the British Fashion Council, which organises the fashion week, told AFP that the industry has had "a very challenging couple of years", exacerbated by Brexit-related changes that entered full force on January 31, 2020.

London's five-day showcase is followed by fashion weeks in Milan and Paris later this month.