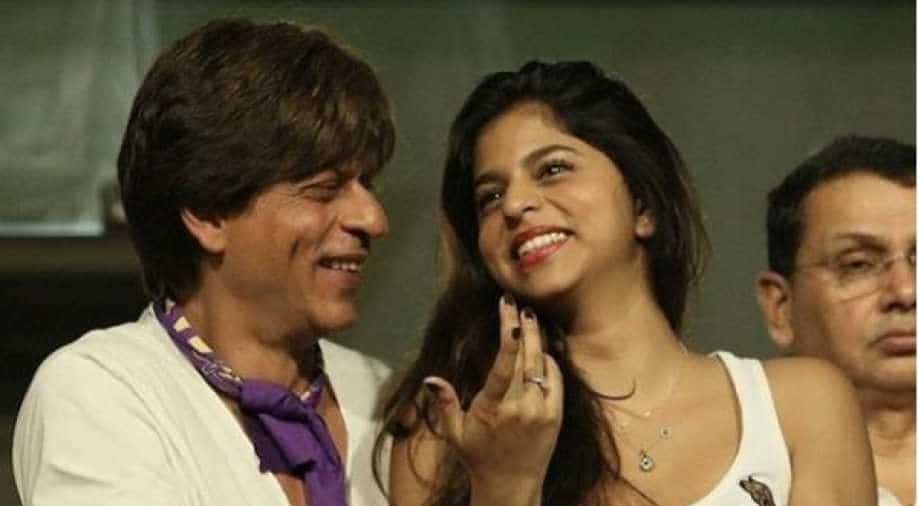 SRK and Suhana on Sunday at Eden Gardens. Photograph:( Instagram )

Suhana, who recently graduated from Ardingly College in London, is all set to feature in the English short film, 'The Grey Part Of Blue' which has been directed by Suhana's classmate Theo Gimeno.

A few weeks back, Shah Rukh Khan's elder son Aryan made his film debut albeit as a voiceover artist in the Hindi dubbed version of 'The Lion King' and now it's his sister Suhana's turn. The young girl is all set to make her film debut in a friend's short film.

Suhana, who recently graduated from Ardingly College in London, is all set to feature in the English short film, 'The Grey Part Of Blue' which has been directed by Suhana's classmate Theo Gimeno.

Gimeno shared the film's poster on Instagram, which features Suhana.

While it is not known if the film will be screened in India, Suhana's acting debut is one of the most anticipated debuts in Bollywood.

In an earlier interview to a magazine, Suhana had opened up about how she has wanted to act from an early age. "I don't think there was any one moment when I decided (to become an actor). Since I was young, I'd do all these accents and impressions. But my parents only realised I was serious about acting when they saw a performance of mine for the first time. I was playing Miranda in a school performance of 'The Tempest'. There's so much to learn, and one way to do it is to start (working) early, but first I want to go to university and finish studies."

Earlier this year, Shah Rukh said that he wants Suhana to learn the craft of acting before venturing into films as he does not want her to simply assume that she is talented.