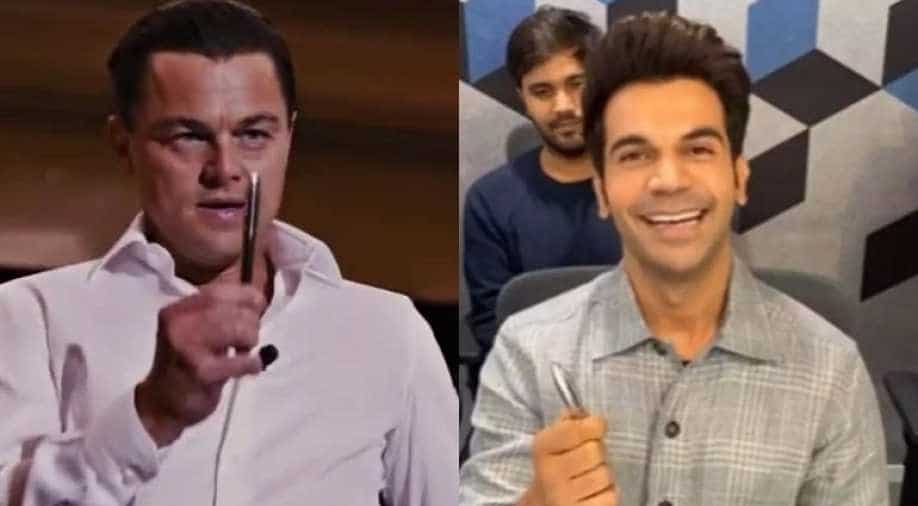 'Made in China', originally scheduled to hit the big screens on August 15, will now be releasing on Diwali this year.

Rajkummar Rao, who will be seen as a Gujarati businessman in the upcoming flick 'Made in China' has shown his exceptionally unique marketing strategy today.

In a post shared by Rao on Instagram, the actor can be seen selling off a pen to none other than Hollywood star, Leonardo DiCaprio. In the post, Rajkumar gave a funnier twist to Leonardo's final scene from his movie 'The Wolf of Wall Street'.

"When Raghu Bhai met Leo Bhai. #MadeInChina," the 'Stree' star captioned the post. The video starts off with the clip of the flick where Hollywood star asks a man to sell him off a pen. Watch movie trailer here

Adding a twist in the iconic scene, Rajkummar enters with the same motive, further proving that no one can sell the pen to Leonardo DiCaprio better than him.

Leo Bhai Kem Cho! Arre Leo Bhai this pen is your story but the refill is the hero. So sell hero, he says in the video in order to convince the 44-year-old Hollywood star.

The video ends with Hollywood star clapping on the skills of the businessman, a sign of him being convinced. Apart from Rao, the movie 'Made In China' also starring Mouni Roy.

The film is a quirky comedy based on the life of a struggling Gujarati businessman, Raghu (Rajkummar), who embarks on a journey to China in order to make his business flourish.

The film has been helmed by National Award-winner Mikhil Musale, who won the best director for his 2016 drama-thriller 'Wrong Side Raju'. Dinesh Vijan is producing the flick.

'Made in China', originally scheduled to hit the big screens on August 15, will now be releasing on Diwali this year.