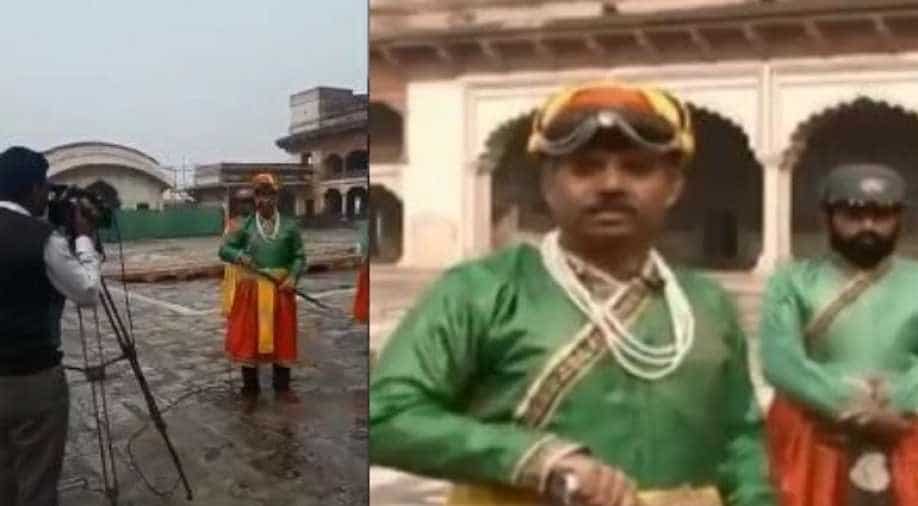 A video posted on Twitter shows Hafeez dressed like an emperor, brandishing a sword while reporting from the Lahore Fort, before signing off.

Pakistani anchor Amin Hafeez is in news again. The man who had earlier interviewed cattle has once again discovered a unique way to report news.

A video posted on Twitter shows Hafeez dressed like an emperor, brandishing a sword while reporting from the Lahore Fort, before signing off.

A behind-the-scenes video of Hafeez was shared by another Pakistani journalist on Twitter that went viral almost instantly.

Another Twitter user shared the final footage that was aired on Geo News. Hafeez was reporting on the uproar that's been created after a wedding was hosted inside the premise of the historic Lahore fort.

Here is the final cut... as received from my friend Amin Hafeez himself. This is Cool 😎 https://t.co/WmNQItByQS pic.twitter.com/DAepMjiS0U

Hafeez himself shared the entire report on his Facebook page.

In no time, the video went viral and Indians on Twitter wondered how long would it take before the idea was copied by various news channels in the country.

This is going to happen on Indian tv news soon. I can’t believe we haven’t done it yet https://t.co/M3FWAIKw2h

Such innovative & brilliant news TV. Shape of things to come for us too, I suppose. On news TV nuttiness, what Pakistan thinks today India thinks tomorrow. https://t.co/IX7Z9e38xt

Reminding me of Indian journalists in space suits, police and army uniforms. A neck to neck race in the news world of the bizarre. https://t.co/XKVUndc1e5

Hafeez has always been known for his innovative news reporting. His cattle interview a few years back is still used as meme material in the subcontinent and now the anchor seems to have moved to grander things.