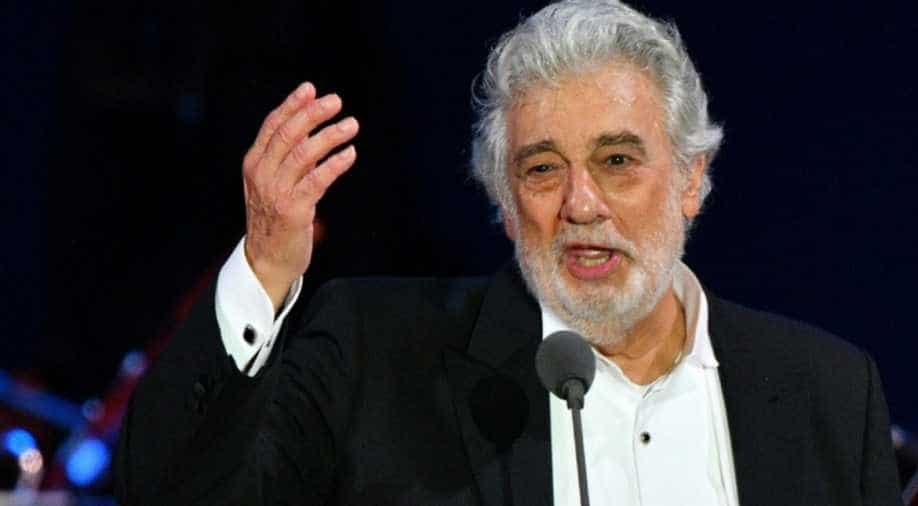 The 11th-hour decision comes just one night before the 78-year-old Spaniard dubbed the 'King of Opera' was scheduled to perform the title role in the Met's sold-out first production of 'Macbeth.'

Placido Domingo, the legendary opera singer facing myriad sexual harassment accusations, is withdrawing from all future performances at New York's Metropolitan Opera, both he and the institution announced Tuesday.

The 11th-hour decision comes just one night before the 78-year-old Spaniard dubbed the 'King of Opera' was scheduled to perform the title role in the Met's sold-out first production of 'Macbeth.'

"Placido Domingo has agreed to withdraw from all future performances at the Met, effective immediately," the opera said in a statement obtained by AFP, saying that the bankable star agreed "that he needed to step down."

Domingo -- who has been a conductor and director of some of the world's most prestigious opera houses, and debuted at the Met at age 27 -- said in a separate statement that he had in fact "asked to withdraw."

"I strongly dispute recent allegations made about me, and I am concerned about a climate in which people are condemned without due process," the singer currently accused of harassment by 20 women said.

But "upon reflection, I believe that my appearance in this production of Macbeth would distract from the hard work of my colleagues both on stage and behind the scenes," he said.

"As a result, I have asked to withdraw and I thank the leadership of the Met for graciously granting my request," he continued, saying he considered his final dress rehearsal his "last performance on the Met stage."

In August eight singers and a dancer told the Associated Press about incidents going back to the 1980s, including one in which a woman said Domingo put his hand down her skirt while three others said he forcibly kissed them.

A subsequent report by the US news agency cited 11 more women, including one who said he reached down her robe to grab her bare breast.

The reports painted a portrait of a man who acted with impunity, shielded by his power as one of opera's foremost stars, as a whisper network formed warning women of his alleged reputation.

Some classical music companies were quick to err on the side of caution, notably the Philadelphia Orchestra and the San Francisco Opera, which immediately cancelled his upcoming performances.

The Los Angeles Opera -- where has served as a general director since 2003 -- hired outside counsel to investigate allegations a probe still ongoing.

The Met previously had said it would wait for those results, and Domingo's split with the Manhattan house comes after reports of internal strife over Domingo's continued association there.

The American Guild of Musical Artists has also launched an independent investigation into accusations against Domingo, "given the uncertainty surrounding the investigations of our signatory companies," its national executive director Len Egert announced earlier this month.

Many fans and fellow performers leapt to Domingo's defence when the accusations broke, with many calling him an innocent "ladies man" who women adored.

An NPR report said the Met Opera's general manager, Peter Gelb, had held a closed-door meeting over the weekend to tell employees he had not suspended Domingo because the AP accounts lacked "corroboration."

According to the report, many employees at the Met had confided anger and fear over Domingo's continued work there, with one person even calling in sick to avoid work with the artist.

The growing #MeToo scandal comes not long after the Met ended its decades-long relationship with James Levine, the house's former music director who was fired in 2018 after nine men publicly accused him of sexual abuse.

Domingo now has a string of European dates on the calendar, including Zurich on October 13 and Moscow October 17.

European houses have thus far taken more of a wait-and-see stance, and he's received standing ovations at shows in Salzburg and Hungary that took place weeks after the accusations dropped.

Domingo's next performances stateside are set to begin February 22 at the Los Angeles Opera, which did not respond to a request for comment on the star's break with the Met.