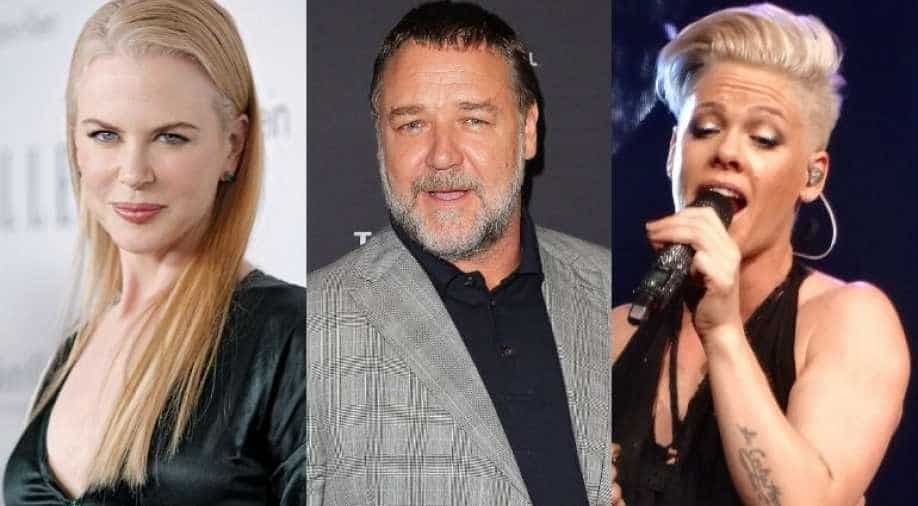 Actors like Nicole Kidman, Rusell Crow and singer Pink have donated for the rehabilitation of the victims Photograph:( Twitter )

Actors, popstars and Britain`s royal family have stepped in to offer support for victims of Australia`s unprecedented bushfires, helping to raise millions for firefighting services and wildlife shelters.

Actors, popstars and Britain`s royal family have stepped in to offer support for victims of Australia`s unprecedented bushfires, helping to raise millions for firefighting services and wildlife shelters.

On Sunday, Australian actor Nicole Kidman pledged a $500,000 donation on behalf of her family to New South Wales state Rural Fire Service, without specifying a currency.

Kidman spent time in Sydney over the New Year, according to a picture posted on Instagram of herself and husband country music singer Keith Urban in front of the Sydney Harbour Bridge.

Sydney has seen some of the poorest air quality of any international city in recent weeks as smoke from bushfires has blanketed the city.

"Our family’s support, thoughts and prayers are with everyone affected by the fires all over Australia," she wrote, next to a link to a national firefighting donation page.

Our family’s support, thoughts and prayers are with everyone affected by the fires all over Australia. We are donating $500,000 to the Rural Fire Services who are all doing and giving so much right now.

On Saturday, Britain`s Queen Elizabeth joined grandsons William and Harry in expressing shock at the bushfires, and sent their thanks to the firefighters who risked their lives to save others.

Australian comedian Celeste Barber, who has family near the bushfire-hit town of Eden on the country`s southeastern coast, and popstars P!nk and Iggy Azalea, who hails from a blaze-hit region north of Sydney, also raised money to support firefighters and animal rescue.

A GoFundMe page set up by Barber, who won fame for her parody photographs mimicking "real-life" reenactments of high-end fashion shoots, had raised A$20 million ($13.90 million) for the NSW Rural Fire Service as of Sunday.

"Our family are being evacuated. I feel sick," she wrote on social media on Saturday.

Meanwhile, pop singer P!nk pledged a $500,000 donation to local fire services that were "battling so hard on the frontlines."
"My heart goes out to our friends and family in Oz."

I am totally devastated watching what is happening in Australia right now with the horrific bushfires. I am pledging a donation of $500,000 directly to the local fire services that are battling so hard on the frontlines. My heart goes out to our friends and family in Oz ❤️ pic.twitter.com/kyjDbhoXpp

Azalea, a rapper who was born in Sydney but raised in Mullumbimby on the north coast of New South Wales, which narrowly avoided bushfires in November, posted a photo on Instagram of her cuddling a koala and called for donations to a local wildlife shelter. By Sunday morning it had raised almost A$100,000.

"Got to visit this cutie yesterday, as well as so many animals injured & rehabilitated at @currumbinwildlifehospital," she said.
"Please donate if you can."

These donations add to those already made by actor Russell Crowe and tech entrepreneur Mike Cannon-Brookes of Atlassian, according to Crowe on Instagram.

Crowe said they donated A$200,000 to regional RFS branches in November after bushfires threatened his property around Nana Glen, around 550 kilometres north of Sydney.