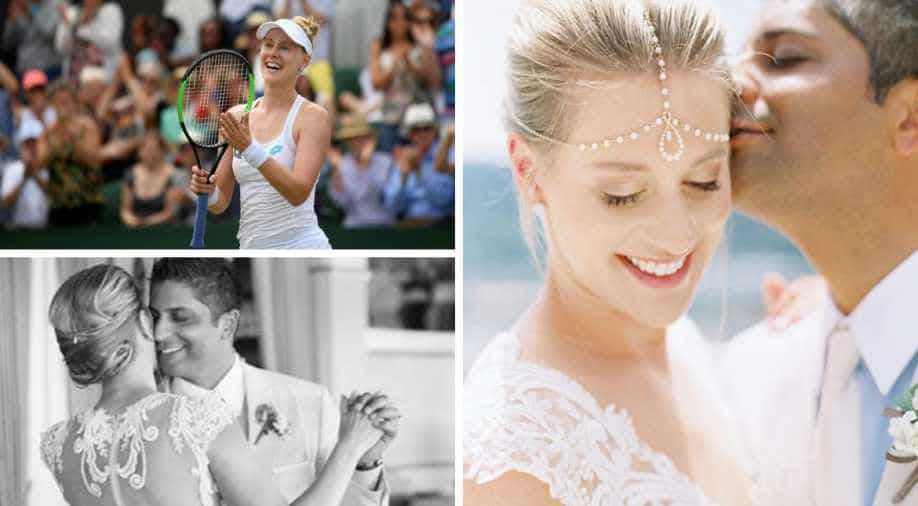 "I practised the Bollywood dance so much that I knew when I got up there if I didn't freeze, I was going to be OK," Riske said.

Alison Riske has made her name in tennis, but her biggest claim to fame might be the Bollywood dance moves from her wedding last month that became an internet sensation.

The 29-year-old American defeated two-time Grand Slam winner Garbine Muguruza of Spain 2-6, 6-1, 6-3 on Tuesday in her first-round match at the US Open.

Riske next faces Latvia's Jelena Ostapenko, the 2017 French Open champion, in her first Grand Slam event since being married a month ago in her hometown of Pittsburgh to Stephen Amritraj, the nephew of India tennis legend Vijay Amritraj.

"The whole weekend was awesome, just to have everyone that we love together -- it was really special," Riske said. "There were so many highlights. The Pittsburgh cookie table was definitely a hit. I think my Bollywood dance went over well, as well."

Riske admitted preparing for the dance brought nerves, but nothing like what she faces on the court.

"I practised the Bollywood dance so much that I knew when I got up there if I didn't freeze, I was going to be OK," Riske said. "Once I got past the initial first move I was ready to go.

"I take a lot more pride in my tennis than I do my Bollywood dance. I feel there's more nerves associated with that than the dance."

But she also admits that her dance moves got greater exposure, thanks to the internet than any of her tennis matches.

"It was hilarious," she said. "The amount of Indian magazines and Indian influencer pages that picked it up was really entertaining for me and my husband. We both really enjoyed that.

"Yeah, I can't say I have ever had anything in my tennis career that got as many watches or likes."

officially an Amritraj! I’m the luckiest lady because of @stephenamritraj ! where all my new Indian followers at??!! here’s a little Bollywood to try to win over your affection! 🤣💞🥂 pic.twitter.com/ejX29aT5cF

The wedding dance wasn't Riske's only exposure to India's culture, a trip to visit her husband's family paying dividends in exciting new ways for Riske.

"I did go to Chennai and I met my husband's grandmother while she was still living, which was really special that I had the opportunity to meet her," Riske said.

See some of her wedding pictures here:

wanted to write some final words to the people that made our dream wedding come true! thank you to @lemontpittsburgh , @perfectlyplanned_pgh , & @mtlebanonfloral for outdoing yourselves in every aspect! you made our weekend flawless. And a special thank you to @partymosaic for your generosity and unmatched taste! we are so grateful to each of you!💞🙏🏻👰🏼🤵🏽

Saturdays are made extra special when I think of our day☺️🥰. 📸: @jacquicole 💞 #burghbride #pittsburgh #wedding

best weekend of my life💞luckiest lady because of this man. to echo my HUSBAND(🙌🏻🥳), we were surrounded by everyone that makes our world go round. grateful as ever👰🏼🤵🏽💞 📸: @caleb_troy & @jacquicole respectively #burghbrides

"India, in general, is unlike anywhere I've ever been in the entire world, not that I've hit every place. I feel you experience it with every sense literally. You'll see things you never see before. You'll smell things you never smelled before. It's definitely an experience.

"I'm sure we will go back together. We had the opportunity, as well, to go north to Delhi and travel to Agra to see the Taj Mahal, which was really special and one of our favourite moments together, for sure."

For now, she would like to have more joyful moments at the US Open.

"I feel really confident. I feel like I'm playing good tennis. I can compete with anyone," Riske said. "I just think there's a sense of freedom that's allowing me to kind of just play my best tennis.

"I'm just really excited that I have given myself a chance to play another match."