Emma Thompson dons Indian-style dress in images taken on sets of 'What’s Love Got To Do With It?' 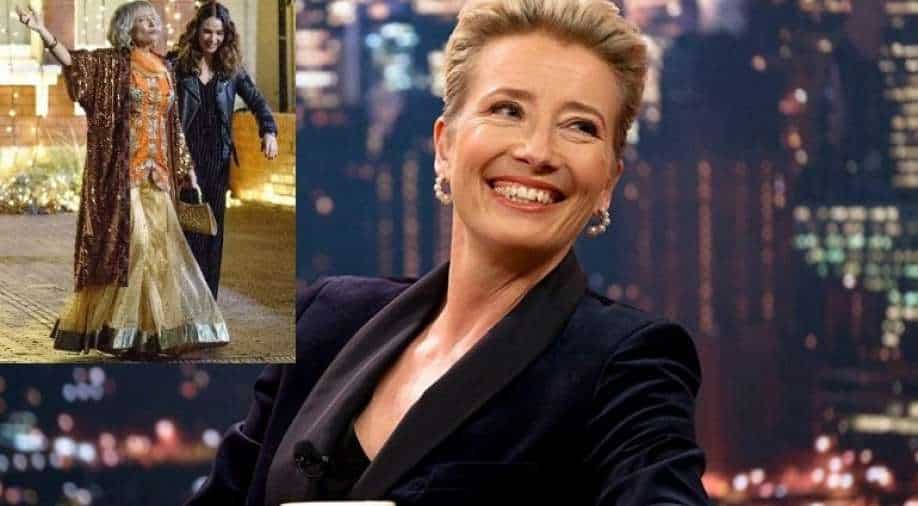 In the images, Thompson is seen in an eye-catching traditional Indian dress, beamed with delight while filming with Lily James.

Dame Emma Thompson will be seen dazzling the screen in a vibrant Indian outfit in her new film 'What’s Love Got To Do With It?'. At least, the images taken from the sets of Shekhar Kapoor's directorial tell so.

In the images, Thompson is seen in an eye-catching traditional Indian dress, beamed with delight while filming with Lily James.

According to Daily Mail, the photographs were as the actresses worked late into the night on location in a West London street to shoot scenes of them leaving a party in high spirits.se.

✨NEW✨ first look at emma thompson in the upcoming movie "what’s love got to do with it?" with her co-star lily james pic.twitter.com/PUxyN0QDCI

In the film, written by Jemima Khan, ex-wife of cricketer and Pakistan premier Imran Khan, Dame Emma plays Cath, the opinionated mother of Ms. James’s character Zoe, who has fallen in love with childhood friend Kazim. Directed by veteran film-maker Shekhar Kapur, What’s Love Got To Do With It? is being filmed in London and South Asia and is described as ‘a cross-cultural comedy’.

‘I’ve been blessed with the opportunity to work with the smartest, most talented, brilliant actresses in the world,’ Kapur said ahead of filming.

Studiocanal has teamed up with British production company Working Title to create the film, hoping to repeat the box-office hits enjoyed by the London-based firm including Bridget Jones’s Baby, Love Actually, and Notting Hill.