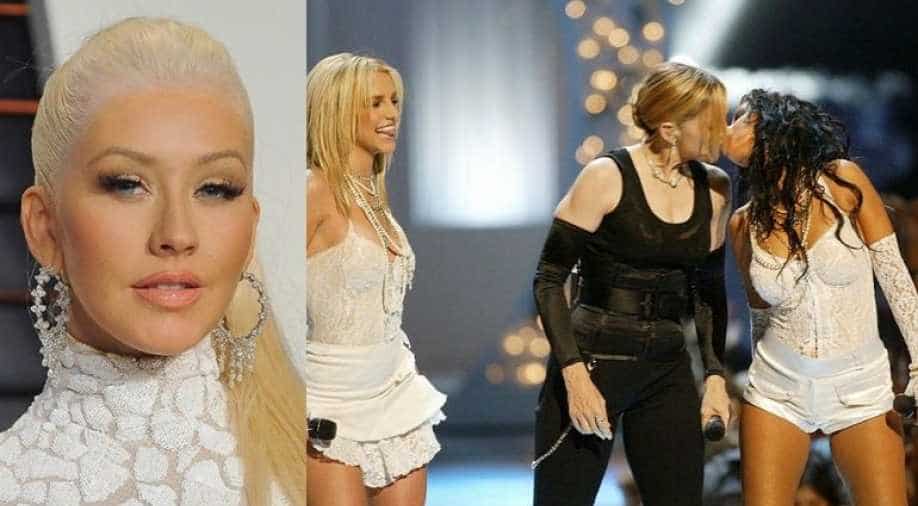 While the lip-lock made headlines at that times, Christina has said she "never thought anything of it."

The 2003 MTV Video Music Awards is best remembered for Madonna’s on-stage kiss with popstar Britney Spears and Christina Aguilera. The three shared kisses- which was part of an elaborate act- to an extremely shocked audience.

Years later, the act is still considered one of the boldest, eyeball grabbing act of our times but Christina Aguilera has opened up and stated there was nothing “shocking” about the kiss.

The singer opened up about the famous pop culture moment during a conversation with Apple Music's Zane Lowe on Thursday. While the lip-lock made headlines at that time, Christina has said she "never thought anything of it."

"Shock value gets more and more extreme or whatever. But honestly, at the time, yeah, I never thought anything of it," she said. "It was like, 'Okay, it's two girls kissing.' "

"It wasn't shocking back then. It's not shocking now, to me. But it's so many things," she added.

Back in 2018, the singer had recalled how the media focussed more on Britney and Madonna’s kiss. Calling it ‘weird’ she had said, “And you know why they cut it? The cutaway to get Justin (Timberlake)’s reaction," she said.

"I saw the newspaper the next day and it was like, ‘Oh — well I guess I got left out of that one.'” However, Christina did not mind it because she later gave an electrifying performance on stage. "I mean everything happened so quickly back then and everything was in a whirlwind," she explained. "But I had my performance that night. It was 'Fighter' and it was with Dave Navarro. It was a kickass performance. So I was okay with that."

During Thursday’s interview, Christina also opened up about how Madonna has been a big influence while her growing up years.

"Madonna, first of all, the queen of reinventing herself, was a huge inspiration," she shared. "When I was little, I was not allowed to listen to her or watch her videos or anything. It was just like a no-no, but then whenever you grow up, and I discovered her catalog and her videos and the fact that she had such a message."