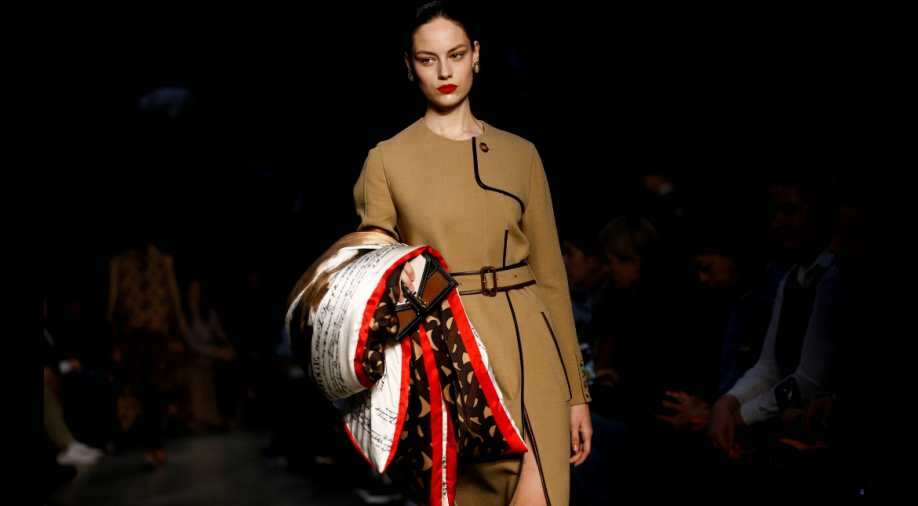 Burberry Group Plc creative head Riccardo Tisci went back to his fashion-student days in 1990s London for his second catwalk show for the luxury label on Sunday, presenting a collection he said looked at Britain as a country of contrasts.

Two rooms, with different music including thumping rap, instrumental and snippets of news bulletins, added to the idea of contrasts in the show, which began with the edgy looks of oversized puffer and quilted jackets, loose polo shirts, corset tops, slip dresses and loose tracksuit-like trousers.

One jacket had the Union Jack flag flowing from the sides, while several had faux fur embellishments or trains.

The Burberry signature check print made an appearance on trenches and other outfits as did the TB monogram - initials of the brand's founder, Thomas Burberry. Shoes consisted of sneakers and booties with animal skin-like prints.

After the casual wear came tailored ensembles, with embellished coats, dresses cinched at the waist and pleated skirts. Burberry's signature trench was deconstructed and came with a poncho worn with embellished heels.

"I have been thinking a lot about England as a country of contrasts, from the structured to the rebellious and free, and I wanted to celebrate how these elements coexist," Tisci said in a statement.

"My first season for Burberry was about starting to develop my alphabet for the house, it was about identifying new letters and new codes. And now, I'm starting to put these letters together to begin writing my book here, to form the first chapter for a new era at Burberry."

For the evening, Tisci presented dresses in beige and black and white. His colour palette consisted of beige with dabs of orange, brown, red and green.

Backstage, Tisci told reporters the collection was about "freedom in the sense of what kids need today. ... They don't have anymore the voice they used to have when I was in London 20 years ago."

The designer, previously at French fashion house Givenchy, studied at London's Central St Martins in the late 1990s, a period he said he looked back at fondly.

The line's feature of four characters - "girl and boy" and "lady and gentlemen" was reflective of the brand's clientele.

"They are talking to different publics, price-wise and need- wise," Tisci said. "It is creative and at the same time thinking of the market you are talking to."