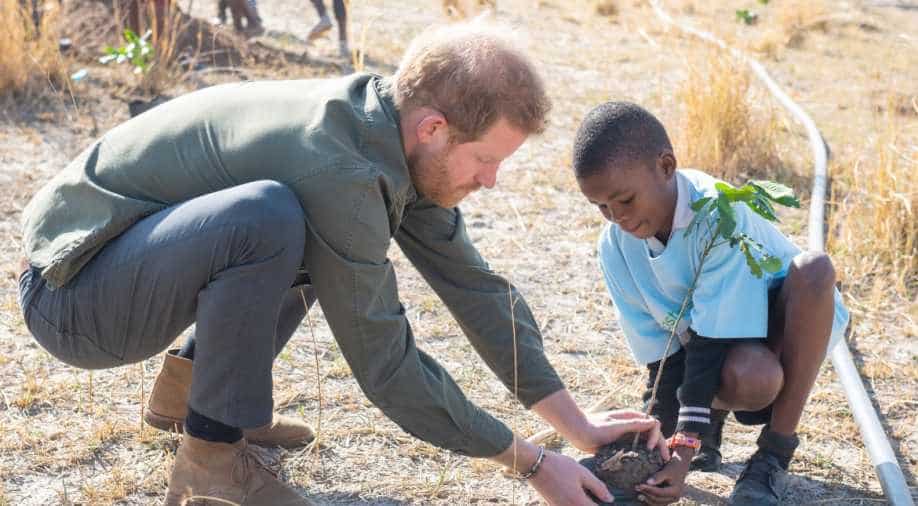 Duke of Sussex helps a local schoolboy to plant a tree at the Chobe National Park, on day four of the royal tour of Africa, in Botswana Photograph:( Reuters )

Britain's Prince Harry warned the world faces "a race against time" and that "no one can deny science" as he arrived in Botswana on Thursday to visit conservation and health projects on the next leg of his family's tour of southern African.

"This last week led by Greta - you know the world's children are striking ... I think there's an emergency ... It's a race against time and one in which we are losing, everyone knows it," Harry said.

The 35-year-old's solo visit to Botswana began at a conservation project where he joined school children to plant trees and raise awareness of the fragility of local ecosystems.

The trip is part of an overseas tour with his wife Meghan and their four-month-old son Archie, which began in South Africa on Monday.

The Duke and Duchess of Sussex have recently been the subject of critical articles in Britain's tabloid media which have accused them of being too politically correct and contrasted their globe-trotting lifestyle with their stand on climate change.

While Harry is in Botswana, Meghan and Archie were to remain in Cape Town.

On Wednesday, much attention focused on Archie, who sat on his mother's lap as his parents chatted with Nobel Peace Prize laureate Desmond Tutu at Tutu's charitable foundation.

Harry has been visiting southern Africa for two decades for holidays and conservation work.

"I have some of my closest friends here over the years and I came here in '97, '98 straight after my mum died," Harry said in Botswana. "So it was a nice place to get away from it all. But now I feel deeply connected to this place and to Africa."

His Botswana trip also included a visit to a project run by his charity Sentebale which focuses on improving the mental health of young people affected by HIV.

He will also dedicate an area of forest to the Queen's Commonwealth Canopy, a project to facilitate the passage of wildlife near the border with Namibia, Zambia and Zimbabwe.

Botswana holds special memories for Harry as it is where he and Meghan visited on holiday shortly after they began dating in July 2016 and returned in 2017.

Next Harry is expected to fly to Angola, where he will visit the landmine clearance project that featured in some of the most famous photographs of his late mother, Princess Diana.

He ends the solo section of his tour in Malawi, where he will meet President Peter Mutharika, before rejoining Meghan and Archie in South Africa for another township visit, this time near Johannesburg.