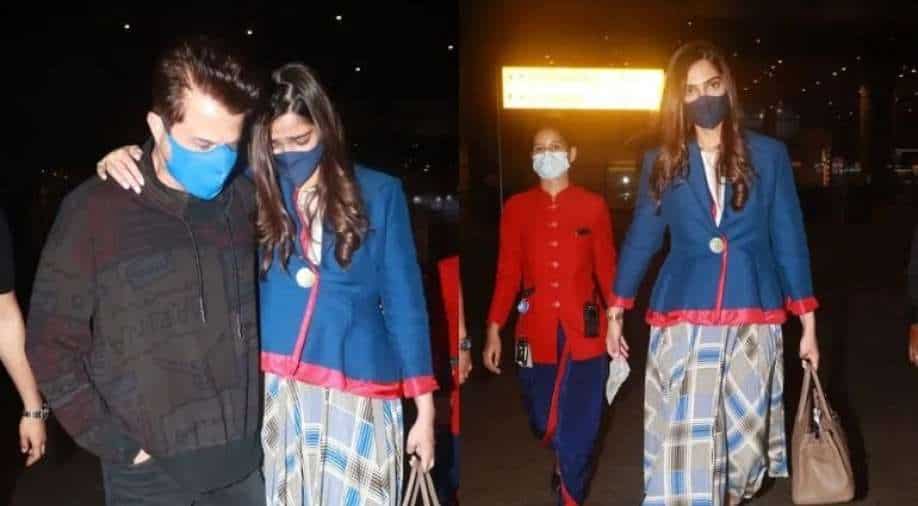 Sonam Kapoor had an emotional reunion at the airport with her father Anil Kapoor Photograph:( Twitter )

Sonam Kapoor returned to Mumbai after an year of being in London with her husband Anand Ahuja.

Bollywood star Sonam Kapoor got emotional at seeing her father, actor Anil Kapoor at the Mumbai airport on Tuesday night. Sonam returned to Mumbai after a year of being in London with her husband Anand Ahuja.

Several videos and pictures of her arriving at the Mumbai airport have been doing the rounds on the internet.

Sonam`s father and veteran actor Anil Kapoor was there to receive her at the airport. The two could be seen getting emotional as they shared a warm hug on seeing each other after a long time.

In one of the clips, Sonam can be seen saying, `Hi Dad`. She then broke down as she walked to their car.

Before coming to Mumbai, Sonam had taken to her Instagram story to share that she`s on her way home.

"Home coming," she wrote, adding a picture of herself sitting in a flight.

Meanwhile, Sonam`s husband Anand Ahuja has already started missing his wife. He posted a picture of Sonam and captioned: "Miss you already."

On the work front, Sonam will next be seen in the movie `Blind`.