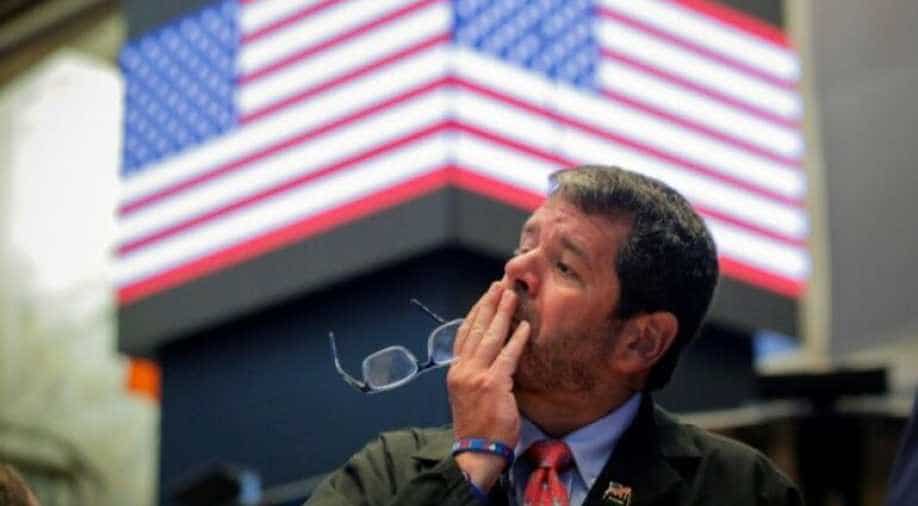 A trader works on the floor at the New York Stock Exchange. Photograph:( Reuters )

The downbeat mood followed a rally in Wall Street's main indexes on Tuesday thanks to the Trump administration's decision to delay tariffs on some Chinese imports.

Wall Street main indexes slid 1.5 per cent on Wednesday, as a closely watched US bond market indicator pointed to a renewed risk of recession following poor economic data from Germany and China.

Yields on the two-year Treasury notes rose above the 10-year yield for the first time since 2007, a metric widely viewed as a classic recession signal.

The interest-rate sensitive bank index slipped 2.50 per cent and the broader financial sector fell 1.95 per cent in response.

Slumping exports sent Germany's economy into reverse in the second quarter, while Chinese industrial output growth cooled to a more than 17-year low in July, putting the focus back on a bruising US-China trade war and its impact on global growth.

The downbeat mood followed a rally in Wall Street's main indexes on Tuesday thanks to the Trump administration's decision to delay tariffs on some Chinese imports.

"It's almost as if global investors either don't buy the tariff delay as a sign of real progress in the US-China trade war or have been too consumed by further evidence of global economic weakness to care," BMO Capital Markets strategist Stephen Gallo said.

The high-growth technology sector was the hardest hit. Shares of Apple Inc were down 1.74per cent after boosting markets a day earlier with a 4per cent rise.

Chipmakers were also down, with the Philadelphia chip index slumping 2.09per cent.

The biggest decliner on the S&P 500 index was Macy's Inc, down 17.2per cent, after the department store operator cut its full-year profit forecast as it discounted heavily to clear excess spring season inventory.

Rivals Target Corp and Nordstrom Inc slipped 3.4per cent and 9.8per cent, respectively.