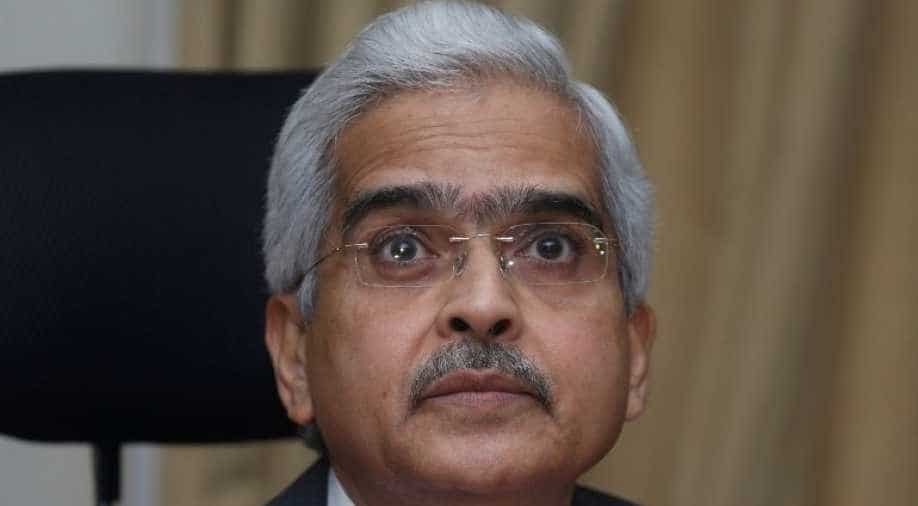 The Reserve Bank of India (RBI) Governor Shaktikanta Das listens to a question during a news conference in Mumbai. Photograph:( Reuters )

The State Bank of India (SBI), the largest lender by assets, has cut its benchmark lending rate by 30 bps.

The Reserve Bank of India (RBI) is looking to get banks to link some new loans to its key policy rate or other external benchmarks, Governor Shaktikanta Das said on Monday, as he pushes them to cut rates faster to stimulate a flagging economy.

Since February, the RBI has cut the repo rate by 110 basis points (bps), but most Indian banks - which rely on an opaque rate-setting mechanism, have not come close to the following suit.

The State Bank of India (SBI), the largest lender by assets, has cut its benchmark lending rate by 30 bps.

Commercial banks cite high deposit rates for their inability to cut loan ones.

Marginal reductions restrict how much borrowers benefit from the repo cuts.

"Today, the economy requires a certain amount of push not just from the monetary policy but also from its transmission," Das said. "I think the time has now come to formalise this linking of new loans to external benchmarks like the repo rate."

"We'd kept the external benchmarks in abeyance earlier because we wanted to see how the market evolves," the governor told a banking conference in Mumbai.

SBI, the largest lender by assets, earlier this year linked its savings bank deposits and short-term loans to the repo rate, becoming the first Indian bank to do so.

"I expect more initiatives and this process to become faster," Das said, adding that the RBI has been in talks with banks ensure "faster and greater" adjustment of rates.

Das also said the central bank was in talks with non-bank housing finance companies (NBFCs) to ensure that none collapse amid a debt crisis in the sector that has contributed to a broader economic slowdown.

The RBI is closely monitoring the 50 biggest NBFCs and housing finance companies, including their capital adequacy, stability and cash flows, Das said.

However, Das said there was no proposal at the moment for any asset quality review for NBFCs.