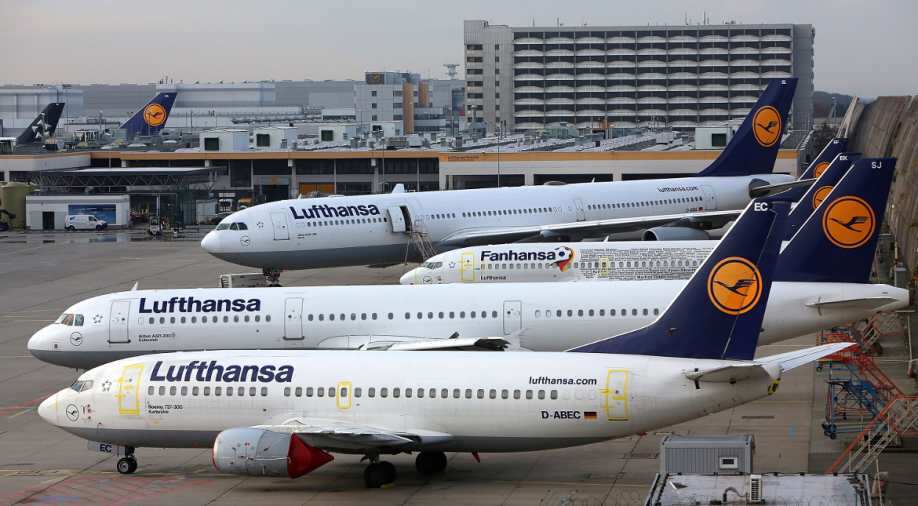 On Wednesday, 900 flights had already been scrapped affecting 100,000 passengers. The decision was made following a walkout by pilots over pay and working conditions. Photograph:( Getty )

At least 912 flights under the German Lufthansa carrier are going to be cancelled on Thursday, grounding 115,000 more passengers, as the pilots extended their strike by a day more.

On Wednesday, 900 flights had already been scrapped affecting 100,000 passengers. The decision was made following a walkout by pilots over pay and working conditions.

The pilots demand a pay rise of an average of 3.66 per cent per year, retroactive for the past five years.

Their union says pilots have endured a wage freeze over that time and suffered a "significant loss of purchasing power" due to inflation, while Lufthansa has made billions in profits, news agency AFP reported.

The airline encouraged the Cockpit union to try to solve the problem rather than escalate the issue.

"Cockpit`s demand for a pay rise... goes far above what other groups of employees have received. It is incomprehensible why the union is seeking the highest salary increase for the best paid group of employees," said Bettina Volkens, Lufthansa's human resources chief, AFP reported.

Sixty more flights were cancelled in a separate walkout by cabin crew at Lufthansa's low-cost airline Eurowings on Tuesday.

This week's two-day strike is the 14th by pilots' union Cockpit since April 2014, AFP said.

The strike has had no effect on Lufthansa group`s other airlines - Germanwings, Swiss, Austrian Airlines, Air Dolomiti and Brussels Airlines.